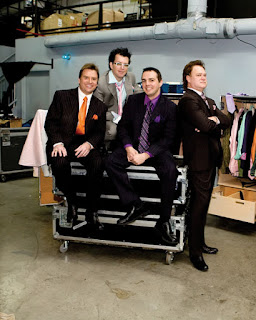 The Smiling Eyes (not to be confused with a Canadian alt rock trio with the same name) hark back to the 1960s throughout a self-titled debut album that’s been around a few years now. Their ringing guitars and highly polished three-part harmonies are especially impressive when the arrangements are energetic and the lyrics have some bite to them. Which makes it easier to overlook the occasional detour into cheesy sentimentality.

“Coloring Book,” a well-intentioned call for universal harmony, is just too cornball to get its message across; and even though the cloying “Man’s Best Friend” is a bonus track, it still doesn’t belong here. It should be noted that lead vocalist-rhythm guitarist Todd Oliver is also a professional comedian, so maybe I’m just not getting the joke. “Only God Knows,” a salute to America’s military men and women, works better, and the believable optimism of “Sunshine”grooves to a catchy melody.

The exhilarating “Love In Motion” is a power pop gem reminiscent of The Romantics, while “Kamila” sports clever wordplay and an energetic arrangement. The satirical, hard-edged “Mr. Man” takes on corporate greed, and the boys loosen their ties on the sexy dance club romp “Shake It.” The jangling “Vision Of Her” and “Mother Nature” should appeal to fans of The Byrds.
Posted by Terry Flamm at 9:57 PM