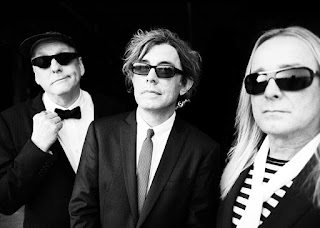 There’s nothing unusual about Victoria’s Secret already lining up musical guests for its 2016 Fashion Show even though the televised event is still months away. For years, Victoria’s Secret has prided itself on booking pop music mega-stars like Bruno Mars and Katy Perry. What is surprising this time around is that the lingerie icon is going with a power pop theme.

“Their decision makes perfect sense,” David Bash told me via a recent email. As the CFO/Founder of International Pop Overthrow, Bash brings his traveling power pop/indie rock showcase to cities in North America and England. IPO will run from April 14 to 23 at The Red Line Tap when it makes its annual visit to Chicago. “Most power pop songs are about yearning for your dream girl, and that’s something I’m sure happens to a lot of guys watching a Victoria’s Secret Fashion Show.”

Victoria Secret Fashion Show producer Monica Mitro asked to meet with me on a recent visit she made to Chicago, since Broken Hearted Toy covers a lot of power pop artists.

“The timing just seemed right,” Mitro explained over lunch at the Spiaggia restaurant on Michigan Avenue. “We thought since Cheap Trick was being inducted into The Rock And Roll Hall Of Fame, why not see if they’d like to be on our show?” The Chicago-based band accepted the invitation, and will perform “So Good To See You” from its legendary In Color album and a yet to be determined song from their brand new album Bang Zoom Crazy… Hello. (Which actually sounds like a description of a VS Fashion Show.) The Romantics, The Bangles, and Taylor Swift (more on her later) are also scheduled to appear.

“From there, everything seemed to fall in place,” Mitro continued. The next band on the VS hit list was The Romantics. “Have you seen their video for ‘Talking In Your Sleep’?” Mitro asked. “They're a natural for us!” She added that other factors impacted the company’s decision, such as Boston-based filmmaker Justin Fielding’s highly anticipated documentary The Power Pop Movie. There’s no word yet on whether Fielding will be interviewing models like Adriana Lima, Alessandra Ambrosio, Lily Aldridge, or Taylor Hill for his documentary, but he has expressed an interest.

It also helped that Taylor Swift’s covers album Power Poppers Gonna Power Pop comes out May 24. Reportedly, the project was inspired by alt rocker Ryan Adams covering Swift’s entire 1989 album, and Swift’s recent discovery of the Secret Weapon program on Woody Radio. Swift and her VS BFF Karlie Kloss dropped by Spiaggia while I was having lunch with Mitro. After setting her shopping bags under the table, Swift was eager to talk about performing “Some Dreams Come True” with The Bangles on the Victoria’s Secret Fashion Show.

“When I first mentioned that I was going to cover a Bangles song, people assumed it would be a hit like ‘Manic Monday’ or 'Eternal Flame’,” Swift explained. “But I wanted to go with one of those awesome power pop album cuts that I loved listening to back when I was a kid in the 1980s.”

Mitro had asked me to suggest some songs that could be played while the Victoria’s Secret models do their thing. The list I brought included “There She Goes” by The La’s; “Behind The Wall Of Sleep” by The Smithereens; “Animal Attraction” by Shoes; “Love Is For Lovers” by The dBs; and “It’s A Night For Beautiful Girls” by The Fools.

Swift brought her own list. “I’ve really been getting into all the cool bands ‘Boris’ plays on Secret Weapon,” she explained.

Mitro collected the lists and promised to give our suggestions some careful consideration. I was proud to do my part in helping bring power pop to a whole new audience.

So don’t be surprised if you see some Victoria’s Secret models scouting Cheap Trick tonight at the Metro in Chicago, and other concerts along their current tour.

Please note that the above post was done on April 1.
Posted by Terry Flamm at 9:14 PM