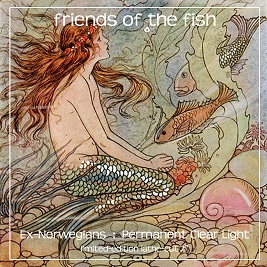 Once you've become acquainted with Fruits de Mer, it's like Record Store Day all year 'round. The latest limited-run vinyl offering from the English indie label is a lathe-cut seven-inch single divided between an American band with a European-sounding name, and a trio from Finland. Released under the Friends of The Fish banner, the record goes on sale Christmas day.

The Miami/New York-based Ex Norwegian has been around in various forms behind singer-guitarist Roger Houdaille since 2008. "It's A Game," originally done by String Driven Thing (but a bigger hit for The Bay City Rollers), offers a preview of the band's sixth release. This faithful cover utilizes a marching beat while while tapping into the band's power pop roots. When Houdaille and vocalist Michelle Grand harmonize on "It's a game, a game, a game that we're playing," it's reminiscent of Material Issue's "Renee Remains The Same." They adroitly sell writer Chris Adams' message of life being absurd, beyond our control, and fun. Houdaille and guitarist Lucas Queiroz power the song, and combine with bassist Guiseppe Rodriguez and drummer Fernando Perdomo for an energetic instrumental passage.

Permanent Clear Light made a splash among European psyche rock fans in 2013 with the "Higher Than The Sun" single from its album Beyond These Things (Havasupai). The easy-going "Corneville Skyline" is taken from the group's second effort, The Other Side Of Life, which is due out next spring. Overflowing with hippie vibes and a hint of The Beatles' "Penny Lane," it sets imagery of small town life to enticing arrangement built on strings, guitarist Markku Helin, and Arto Kakko's percussion, keyboards, and alto recorder. Vocalist Matti Laitinen delivers the cryptic lyrics involving wedding vows; a simple and a clever sister; and a guy who envisions spending all summer with a smile on his face.
Posted by Terry Flamm at 11:11 PM