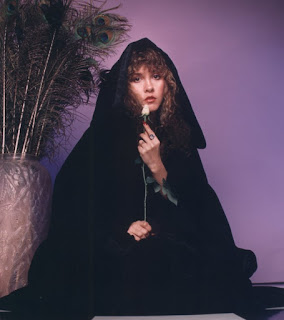 Remember when everyone thought Stevie Nicks was a witch?

Happy Halloween!
Here are some posts about mysterious women, taken from a previous October.


"Jacksie" - Over The Rhine The Cincinnati-based band headed by vocalist/guitarist Karin Bergquist and bassist/keyboards player Linford Detweiler has garnered critical acclaim for weaving elements of folk, country, and indie rock behind thought-provoking lyrics. “Jacksie,” the haunting opening track from the band’s 1992 Patience CD, was inspired by the book, A Grief Observed by C.S. Lewis. It deals with the loss of a loved one. Still, a casual listener could be forgiven for thinking this is a classic ghost story, especially with lyrics like, “They laid her in the ground./She still comes around/A love that never dies takes you by surprise.” Bergquist’s ethereal vocals, set to a slow, melodic arrangement, sends chills up your spine, especially the way her “la la la la la la la” echoes like you’re traveling through a dark forest.

"White Queen" - Queen  A thread of medieval sorcery runs through Queen’s second LP, released in 1974. Lead singer Freddie Mercury’s compositions, “Ogre Battle” and “The March Of The Black Queen” provide some of the scarier moments on Queen II, while guitarist Brian May’s atmospheric “White Queen” is more like a Shakespearean drama of unrequited love. Set to a gentle arrangement that gradually builds power, the poetic lyrics depict a man who maintains a nocturnal vigil for a beautiful yet sad-eyed maiden. “And ‘neath her window have I stayed/I loved the footsteps that she made/And when she came/White queen how my heart did ache.” Later, he declares, “The white queen walks and the night grows pale.” There’s a hint of something supernatural going on here, as though the troubled damsel needs this guy to save her. “So sad it ends,” the song concludes, “as it began.”

"Guinnevere" - Crosby, Stills And Nash Sometimes what is unseen is more terrifying than what is clearly visible. “Guinnevere,” a haunting folk rock tale from the first Crosby, Stills, and Nash record, plays a similar game of suspense. Set in a lush tropical paradise with peacocks and orange trees, and conveyed through gorgeous harmony vocals, the song describes two beautiful but doomed young women. One, Guinnevere, has mysteriously vanished, perhaps a consequence of having dabbled in the occult with pentagrams. The second woman seems to be following in her footsteps. Writer David Crosby casts himself as a sailor who has romanced both women, and it’s left unclear as to whether he’s an instrument in their destruction or just a helpless observer. See “The Lee Shore” for another of Crosby’s mysterious seafaring yarns.

"Rhiannon" - Fleetwood Mac Back in 1975, no one could have predicted that the arrival of Stevie Nicks and Lindsey Buckingham would transform Fleetwood Mac into the world’s hottest band. Perhaps some of that success came from divine intervention. Nicks explained that her melodic composition “Rhiannon,” which became one of the Top 40 hits from the LP, Fleetwood Mac, was about a Welsh witch, but Rhiannon was also a goddess in Welsh mythology who wore a gold dress and rode a white horse. The song’s mysterious lyrics like, “Would you stay if she promised you heaven” and “She is like a cat in the dark/And then she is the darkness,” could refer to either the deity or the sorceress. Fleetwood Mac, having already recorded scary songs like “Hypnotized” and “Black Magic Woman,” knew how to bring “Rhiannon” to life with a classic rock arrangement.

“My Girlfriend Is A Witch” - October Country This song is just one of the many cool audio artifacts to be found on the Rhino CD compilation, Where The Action Is! Los Angeles Nuggets: 1965-1968. Recorded in 1968 by a band that never found success beyond the West Coast, this is classic garage rock, with fun, spooky lyrics like, “Riding high/Leaving trails of smoke across the sky/On a broom/Glad that I am safe within my room.” In this case, having an other-worldly significant other doesn’t seem to have any ill effects, but it does inspire a bit of competition. “What a fate/A worshiper of magic for a day/But tonight I become a warlock just for spite.” The song was written by record producer Michael Lloyd, who also provided lead vocals and some high-powered psychedelic guitar strumming, along with Marty Arsenault.

“Tick Tock” - Crystal Jacqueline And The Honey Pot This song was originally done by the English band The Fleur de Lys. Several years later, Crystal Jacqueline And The Honey Pot recorded it for the UK all-vinyl Fruits de Mer label. Crystal Jacqueline often sounds like she’s conjuring something mysterious, and along with members of The Honey Pot (guitarist Icarus Peel, bassist Tom Brown, and drummer Wayne Fraquet), she creates some scary fun here. “Tick Tock” is about a witch who’s about to fly off at the stroke of midnight to haunt the bedrooms of little boys and girls. “You better watch out, I’m on my way,” the witch taunts, “and I’ve made my witch’s brew.”

Want more Halloween fun? Check out October, 2009 in the BHT archives. I did 31 Halloween song posts that year. I’ve done a few more during the month of October in the years since then.
Posted by Terry Flamm at 4:21 PM