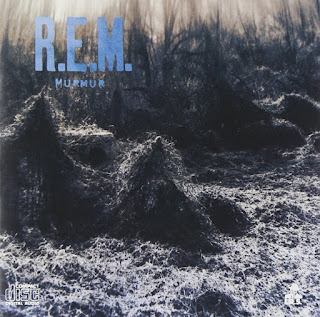 It's Slumgullion on a Thursday, with some pumpkin spice.

Mimicking Murmur. R.E.M.'s murky yet brilliant full-length debut Murmur is getting some attention in Chicago these days. Phil Angotti, Mike Mackin, Niko Stavropoulos, Jim Barclay, and Bobby Lynch will be performing the LP in its entirety at Reggie's on State Street tonight. Unknown Pleasures, covering Joy Division, and Guns And Ammunition, covering The Clash, are also on the bill.

On November 13, Chicago's best-known tribute band Tributosaurus will be performing Murmer + R.E.M.'s greatest hits at Metro on Clark Street as part of the venue's 33 1/3 Anniversary celebration. The 18 and older show kicks off at 8:00 PM.

Halloweekend, the annual celebration in which local bands take turns paying tribute to a famous artist, takes place tomorrow,  October 30 and Saturday, October 31 at The High Hat Club on Irving Park Road. Here's the lineup of the performers and who'll they'll be covering: Ellis Clark as The Velvet Underground; The Webstirs as Devo; The Fiction Romantics as The Buzzcocks; I Lost Control as The Cramps; and Josh Lava as Rufus Wainwright on Friday. Phil Angotti as The Turtles; Androgynous Mustache as Joan Jett; Decoy Prayer Meeting as Echo And The Bunnymen; Joel Patterson as ZZ Top; and Charlie Short as Big Star on Saturday.

The Guild Theater in Des Plaines wraps up its run of Stories Of The Macabre, a selection of scary tales from Edgar Allan Poe, Washington Irving, Saki, and W.W. Jacobs on Halloween night at the Leela Arts Center.

Congratulations to veteran rock and roll photographer Henry Diltz on being recognized at this year's Lucie Awards, an annual celebration of achievements in photography. Tonight, Diltz will join fellow rock photographer Joel Bernstein and Graham Nash (who has been known to take pictures) for Bernstein Diltz and Nash, a showing of their prints at the Morrison Hotel Gallery in New York. In Chicago, The Visions Of A Magic Time exhibit, featuring photographs by Diltz, Patti Boyd, and Carinthia West, wraps up its run tomorrow, October 30, at the Hilton / Asmus Foto gallery.

The Go Fund Me campaign to help Smithereens vocalist-guitarist Pat DiNizio pay medical bills from recent surgery on his right arm and hand has now raised over $15,600 of its $20,000 goal. In other Smithereens good news, the band will embark on a 30th Anniversary Tour to commemorate the 1986 release of full length debut Especially For You. In addition to the band performing the entire album, its biggest hits, and deep cuts, the shows will include the screening of a Smithereens documentary. A recent Smithereens post on Facebook also mentions the possibility of some new tracks from a brand new album due next summer.

Elvis Costello will be in town this coming Tuesday, November 3 to discuss his new book Unfaithful Music And Disappearing Ink at the Chicago Humanities Festival. The festival's associate artistic director Alison Cuddy will be joining Costello in the Diane and David B. Heller Auditorium at Francis B. Parker school, 2233 N. Clark Street.

Happy Birthday to musician/artist Graham Elvis (The Elvis Brothers, Sgt. Popgrass) and best wishes for a full recovery after his recent surgery. He's back home recuperating, according to updates posted by his wife on Facebook. The Go Fund Me campaign to help pay his medical bills has now raised  $3,863 of its $5,000 goal.

Van Go and the Valley Downs will be on a double bill next Saturday, November 7 at The Gallery Cabaret in Chicago. Both of these bands match intriguing lyrics to catchy melodies, and are long-time participants of International Pop Overthrow - Chicago.

Fans of Game Theory and The Loud Family will want to check out Brett Milano's book about Scott Miller, the singer-guitarist who fronted both of those bands. Don't All Thank Me At Once - The Lost Pop Genius of Scott Miller is now available on Amazon. Milano interviewed Mitch Easter of Let's Active; Ken Stringfellow of The Posies; and Til Tuesday vocalist and solo artist Aimee Mann for the book. Miller's repertoire of exquisite pop songs included "Erica's Word," "Regenisraen," and "Aerodeliria."
Posted by Terry Flamm at 5:44 PM