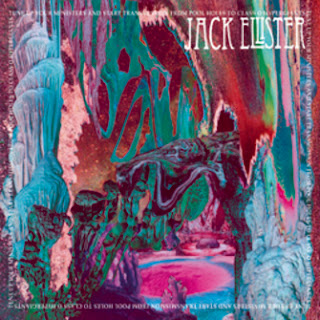 Jack Ellister isn't well known in America, but he's been steadily building a following among European prog/psyche rock fans over the past few years. After leaving Yordan Orchestra, the band he formed in Holland, the vocalist/multi-instrumentalist released two solo EPs and is a regular participant on compilations from the UK vinyl-only label Fruits de Mer. Tune Up Your Ministers And Start Transmission From Pool Holes To Class O Hypergiants, his very oddly titled full-length debut, comes out on FdM in a few weeks.

Ellister whips up his own universe on "The Man With The Biochopper" (previously released as a single) using synthesizers, guitars, and an ethereal female backing vocalist. A small army of musicians and singers helps him craft multi-layered arrangements throughout Tune Up. His British-sounding vocal style evokes David Bowie on the eccentric "Saddle Up The Horse" and the sci-fi epic "Great Esmeralda," but he comes across as more sinister on shuffling and eerie "Curator."

"The Sun Sends Me Hails, Victory, Power, Peace, and Shelter" is one of the more inspiring morning songs you're likely to hear, and the way Ellister cuts loose on acoustic guitar recalls The Who and The Moody Blues back in the 1970s. "Wishmachine" is a short, psychedelic treat, and Ellister is also very effective with the simple but alluring "Old South."
Posted by Terry Flamm at 10:52 PM