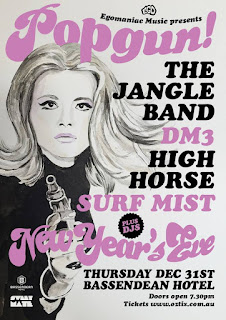 They'll be setting up a Moral Kiosk tonight at Metro on Clark Street as tribute band Tributosaurus performs Murmur+ R.E.M.'s greatest hits. The 18 and older show, which is part of Metro's 33 1/3 Anniversary celebration, starts at 8:00 PM.

Local indie rock band Whitewolfsonicpricess is hosting a multi-act event called The Rock 'N' Roll Circus this Sunday at The Red Line Tap. Additional performers include the theatrical duo Citizen's Relief; performance artist KC Chronis; The Rut (a musical offshoot of the Famous In The Future comedy group); and The Telepaths, a garage rock band that includes James Moeller from Whitewolfsonicprincess and journalist and Famous In The Future cast member Pat Uber-Critic McDonald. Admission is $5.00 and the eclectic-ity starts at 4:00 PM. When I reviewed that last showcase Whitewolfsonicprincess staged at The Red Line Tap, I compared it to the freewheeling Abbie Hoffman Died For Our Sins festival that Mary-Arrchie hosts each year.

Actually, there will be only one more Abbie Fest since the Mary-Arrchie Theatre is calling 2015/16 its final season after 30 years of offering cutting-edge theatre on Chicago's north side. Mary-Arrchie is currently staging Henrik Ibsen's Ghosts through December 20. The play is directed by Neo-Futurists founding director Greg Allen.

Tickets went on sale today for Guster's January 29 show at the Vic Theatre. Other upcoming shows include Rhett Miller at City Winery on December 12 and Savages at Metro on April 7, 2016.

Chicago filmmaker Michael Smith's feature-length film Cool Apocalypse will receive its Chicago premiere at The Gene Siskel Film Center next Saturday, November 21at 8:00 PM. There will be another screening on Monday, November 23 at 8:15 PM. Smith also wrote the movie, which centers on twenty-somethings on Chicago's north side embarking on romantic adventures. From the description, it looks like a bit of paranormal activity may be involved as well.

Practice, practice, practice. Congratulations to Liverpool Legends on getting to Carnegie Hall. The Beatles tribute band has a March 5, 2016 date at the esteemed New York performance venue.

Gregory Curvey, who performs with the Chicago-based psyche band The Luck Of Eden Hall, has begun work on the soundtrack for the upcoming Traveling Without Moving from Dreaming Tree Films. The flick is about teenagers who search for their parents in another world, utilizing their science project. The Luck Of Eden Hall previously created the theme song for the Chicago WTTW TV show Moochie Kalala Detectives Club.

I've finally had a chance to check Peter Capaldi as the 12th version of The Doctor on Doctor Who, thanks to a DVD box set from the Palatine Public Library. Capaldi is definitely a change of pace from the younger Smith and Tennant, but he brings his own humor and dark-edged charisma to one of the most famous roles in sci-fi television. The way his Doctor spars with Coleman's Clara, and his awkward reactions to human emotions suggests an older Sheldon Cooper from The Big Bang Theory. As far as I know, there hasn't been a Doctor Who-related cameo on The Big Bang Theory, but it sure would be fun to see Tennant, Piper, Smith, Gillan, Coleman, or Capaldi drop in on Sheldon and Leonard.

If you're looking for something to do on New Year's Eve and don't mind traveling to Australia, musician Joe Algeri has a four-band event called Popgun! scheduled at the Bassendean Hotel. The Jangle Band, one of Algeri's groups (he's also a member of The Britannicas); DM3; High Horse; and Surf Mist will be on hand to welcome in 2016. In the meantime, Algeri has created an Awards event via his Egomaniac Music company, and nominated himself for just about every category.