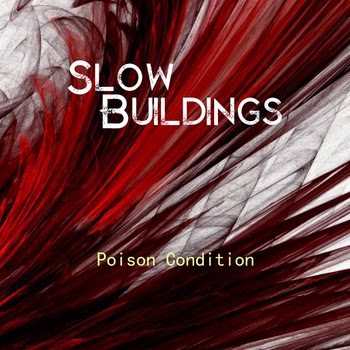 I meant to post this review last night, but I was making rather merry at the WXRT 2014 Listeners Poll Gala at City Winery and got a bit behind my time.

Poison Condition is a five-song EP that follows quickly on the heels of A Fresh Slice, the full-length album Slow Buildings also released in 2014. Nonetheless, it’s a well-thought out effort, even if some of those thoughts are dark and mean-spirited. As the title suggests, it’s almost as if the New Jersey-based indie rock quartet needed to get these venomous sentiments out of its system.

“Where [are] the magical medications/To deal with these vanishing expectations?” lead vocalist-guitarist Jason Legacy wonders on the title track. It’s a guitar-driven portrait of a guy who’s no longer in control of his mind or body, and like the other four songs here, it’s set to a catchy arrangement with echoes of 1980s new wave and pub rock. Bassist Christopher Basile and drummer Marx Lenin propel the snakey and fun instrumentation on “Cruise Elroy” while Legacy notes, “It’s a hard world/Maybe you’ve found that too.” On “Calling It Off, ” Slow Buildings use a calypso beat to dismiss a moody friend.

The satiric “Aggressively Stupid” sports abrasive observations like, “And she tells me vapid bullshit is good/She’s the human Access Hollywood” and “I see no happy ending for you with me.” “Your Celibate Life” seems to be about unrequited love although the lyrics find Slow Buildings at their most cryptic. Still, it’s hard to resist the infectious mix of twangy and acoustic guitars, layered vocals, and the way Chris Fuchs creates an orchestral effect on keyboards. This kind of poison is easy to take.

Poison Condition garnered an Honorable Mention on the Broken Hearted Toy Favorite Releases of 2014 List (See December 1st post). Had I been more familiar with it at the time, it would have been included within the Top 40.
Posted by Terry Flamm at 2:37 PM