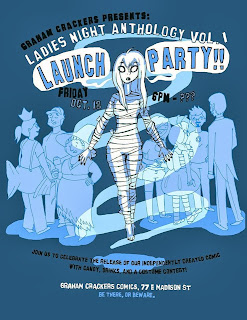 Hopefully, there will be more Slumgullion later today or tomorrow. Here are a few things that are going on in the Chicago area tonight.

Women In The Illustrator’s Chair. The Graham Crackers Comic Books store on Madison in downtown Chicago is presenting the Ladies Night Anthology Vol. 1 Spooky Launch Party tonight. The 60-page debut was created by local women comic artists over the past year, and will be available for $9.99. The Launch Party will include snacks and candy; costumes are encouraged.

The Vic Theatre Has Got It Going On. There will be a wealth of power pop and alt rock tonight when Fountains Of Wayne, Soul Asylum, and former Lemonheads lead vocalist Evan Dando perform at The Vic.  The music starts at 8:00 PM.

Someone Is Still Making Unusual Pop Music. Meanwhile, Someone Still Loves You Boris Yeltsin, who are every bit as quirky (but fun) as their name suggests, have  a gig at Subterranean. The band will probably be playing tunes from its latest album, Fly By Wire. A Great Big Pile Of Leaves (talk about quirky names) and The Damn Choir are also on the bill. Doors open at 8:30.
Posted by Terry Flamm at 10:34 AM