Imitation Is The Sincerest Way To Rock Out - Extended Version In Blue Ink! 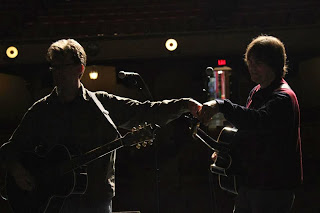 I’ve written a lot about International Pop Overthrow - Chicago in the past few years, but my expertise with this annual festival is a drop in the bucket compared to what Mike Cohen and Jeff Janulis know about it. As the founding members of The Abbeys, they’ve performed at every IPO - Chicago festival since it started in 2001.

“The audiences are always SO receptive to our music,” Cohen stated in a recent email, when asked why The Abbeys keep going back. “A short showcase allows us to put together a great set, no filler...occasionally throw in a favorite cover, but concentrate on our core material.”

The Abbeys have created a four-act line-up called Chicago Pop Revue for this Saturday night that borrows a page from International Pop Overthrow CEO/Founder David Bash’s playbook. And like recent IPO - Chicago gigs, it will be held at the Red Line Tap.

“Brettly K, the manager gets it,” Cohen notes. “Plus the Ike Taylor drink (oof!). They’re a friendly bunch. It’s a nice, intimate place to play.”

Also like International Pop Overthrow (which Bash brings to various cities in the U.S., Canada, and England), The Abbeys have branched out a bit from their power pop base in choosing participants. Amber Stereo leans more toward punk, and claims Lucky Boys Confusion and Streetlight Manifesto as influences. Judging from their Facebook page, these guys approach rock with a sense of humor. The Logan Squares played their first IPO - Chicago gig this past April. Their guitar-driven set recalled R.E.M, and The Logan Squares broke free with frequent spirited instrumental passages, while never coming across as a self-indulgent.

“Logan Squares are new friends from [this] past IPO.” Cohen noted.

The Webstirs have mastered the art of eccentric pop music (not many bands have songs like “Maurice Klybatzia” in their repertoire) and are IPO - Chicago veterans. Band members Preston Pisellini and Mark Winkler will be performing an acoustic set as part of Chicago Pop Revue tomorrow night that will hopefully include catchy and clever songs from CDs like Smirk. This will be the first time in a few years, that I won’t be seeing The Webstirs doing a Halloween tribute band show, but maybe Pisellini and Winkler can do a few copy tunes.

“Preston, Mark and I go back...way back...pre-Webstirs when we played in Thrugmullions,” Cohen recalled. “And debuted ‘Little Submarine’. I’ve been playing that song since the late 80s!”

The Abbeys are a highly polished and fun band. They’ll be selling copies of their new Please File Under: Twang CD (see September 23rd in Archives for review) for $10, or two for $15. If this initial Chicago Pop Revue goes over well, the question arises as to whether The Abbeys would consider this an ongoing venture.

“I’d love to do a caravan of shows with like-minded artist/friends,” Cohen acknowledged. “It allows all to put out their best material. I am hoping we get a nice little crowd tonight!”

Despite Chicago Pop Revue being held on the last Saturday in October, it’s not a Halloween-themed event as far as I know. But if you listen carefully, you’ll detect the spirit of David Bash.