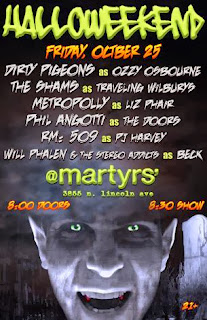 I haven’t been able to find anything recently online about this, but according to a post a while back on the Chicago Cultural Center website, there’s an official Opening Reception there tonight for Shutter To Think: The Rock And Roll Lens Of Paul Natkin from 5:30 to 7:30 PM. Admission is free and open to the public. It might be worth dropping by if you’re in the downtown area in case it’s still on.

It looks like tonight and tomorrow night will be when the bulk of this year’s Halloween celebrating will be taking place. Here a few options:

Foundlings Theatre Company is presenting a Psycho Halloween Party tonight to help raise funds for its upcoming production of Shakespeare’s Twelfth Night. There will be a keg, jello shots, and  a costume party. Admission is $5.

There’s just a single night for this year’s installment of the Halloweekend tribute band celebration, and it will be this evening at Martyrs’ on Lincoln Avenue. The scheduled acts are Will Phalen and The Stereo Addicts as Beck; Rm:509 as PJ Harvey; Phil Angotti as The Doors; Metropolly as Liz Phair; The Shams as The Traveling Wilburys; and The Dirty Pigeons as Ozzie Osbourne. The show starts at 8:40 PM; admission is $10 in advance; $12 at the door.

Phathom, a creative group with a mission is to feature “artists, writers, and film makers that take us beyond” is sponsoring a Zombeing Fallout Shelter tomorrow night at 4170 Madison Street in Hillside. The promo postcard hails this “as part film, part immersive theatre, part haunted house, part online entertainment.”

Zombies will also be on the menu (or will have people on their menu) when Elgin holds its annual Nightmare On Chicago Street  tomorrow night. Lots of Elgin’s citizens get involved with this Halloween celebration, including artist Dave Metzger, who made a few appearances in my Manchester Gallery series for the online show Sunday Morning Coffee With Jeff. CWJ host/producer Jeff Kelley has filmed numerous bits for the Nightmare On Chicago Street project, and I’ve been honored to act in a few of them.

And now onto non-Halloween events going on this weekend.

It’s not scary, but sad. Dot Dot Dot will perform its swan song tomorrow night at the H.O.M.E. Bar in Arlington Heights. Even though fans can’t talk the band out of quiting, at least there will be a consolation gift. Each person who buys a ticket to this final gig will receive a link to download Dot Dot Dot’s soon to be released five-song EP, Et Cetera. See the official Dot Dot Dot website for details.

The Melismatics will headline a four-act showcase tomorrow night at Reggies. I just submitted my review of the band’s new Rising Tide CD to the Illinois Entertainer, so hopefully it will run in the November issue. Also on the bill at Reggie’s are The Handcuffs, The Rebel Sect, and Vanarays. Check out Reggie’s website, which has a profile on each band, along with audio clips.

Brendan Benson and several of his musical friends will be doing a benefit for The David Lynch Foundation and Lightning 100 on December 18th at the Ryman Auditorium in Nashville, Tennessee. Benson’s guests include Eric Burdon from The Animals, Jon Auer an Ken Stringfellow from The Posies, his band mate from The Raconteurs, Jack White, Adriel Denae, and Cory Chisel. The Howlin’ Brothers will also join in, after doing the opening set. Tickets for Brendan Benson And Friends  are $27 in advance, $30 at the door. Proceeds will go to veterans and at-risk children in the Nashville area.
Posted by Terry Flamm at 11:56 AM