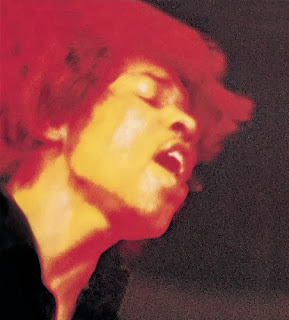 Following a tradition that began on Broken Hearted Toy in October of 2009, here’s a profile of a song that’s well-suited for the Halloween season. For more Halloween songs, check the month of October for each year in the BHT archives.

Any respectable Halloween rock playlist should include some Jimi Hendrix music. There was a haunting, other-worldly quality to several of his songs; from the heart-pounding, psychedelic confusion of “Purple Haze” to his mesmerizing take on Dylan’s mysterious “All Along The Watchtower.” Not to mention “Angel” and “The Wind Cries Mary.”

There’s no mention of ghosts, witches, or zombies in “Voodoo Child (Slight Return),” but after a few moments of chicken scratch guitar and stomping, all hell breaks loose. I haven’t seen that new movie Gravity, but from the reviews I’ve read, the scenes of astronauts careening through space are probably similar to the sensation Hendrix creates on “Voodoo Child (Slight Return).” He cranks his guitar at full volume and then lets it spiral off into the distance. It’s easy to imagine debris flying all around you.

There lyrics for “Voodoo Child (Slight Return)” are minimal particularly for a track that’s over five minutes long. But it begins with an amazing image, as Hendrix boasts, “I stand up next to a mountain/And chop it down with the edge of my hand.” The song also includes one of his most frequently quoted lines, “If I’ll see you no more in this world/I’ll meet ya in the next one/ Don’t be late.”
Posted by Terry Flamm at 11:15 PM