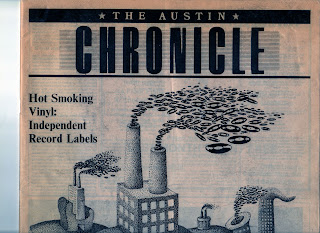 Any time I visit another city, one of my first goals to find the local free paper. Since I’ve never been to Austin, Texas, I must have persuaded someone else to get me this September, 1986 issue of The Austin Chronicle while they were on vacation. Published by Nick Barbaro, with Sylvia Martindale as Associate Publisher, it was done in a similar format to the Chicago Reader. Louis Black served as Editor; Jim Shahin as Political Editor; and Jeff Whittington as Assistant Editor.

Artist Keith Graves did the clever art for a cover story on independent labels that featured profiles of small record companies like Jungle; Rabid Cat; Glitch; and Wrestler. There were also some helpful tips on how to start an independent label. Shahin did an extensive piece on race relations in the city. A letter to the Editor from reader Beverly Howard scolded the paper for having “some major technical errors” in a previous article about how to hook up a VCR.

Kent Benjamin reviewed The Monkees’ film Head;  Martin Scorsese’s After Hours; and the 1963 flick Lord Of The Flies in his At Home With Video column. Michael Corcoran covered the entertainment beat in his column, Don’t You Get Me Talking; and there were record reviews of  Big Guitars From Texas II and Doctor John. New releases covered in the film section included Aliens; The Fly;  Extremities; and Ruthless People. Nicole Hollander’s Sylvia and Matt Groening’s Life In Hell comics were also featured in this issue.

The graphics throughout The Austin Chronicle were impressive, in ads as well as editorial. The Record Exchange store’s artistic calendar noted the birthdays of various rock stars; there was a half page ad for The Smithereens’ Especially For You album; and an ad for the Austin Record Convention at the Palmer Municipal Auditorium claimed it was The Largest Record Sale in The Known Universe.  Long live vinyl.
Posted by Terry Flamm at 10:39 PM