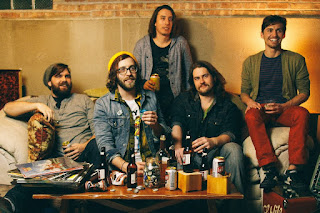 Photo from the Archie Powell And The Exports Facebook page.

I’ve thoroughly cleaned my gazebo in the hope that The Rolling Stones will use it to rehearse during their extended Chicago area visit, but so far I haven’t heard from them.

As written up in the Chicago Tribune and Chicago Sun-Times, noted photographer Paul Natkin is now displaying some of his most famous rock and roll pics at an exhibit at the Elmhurst Historical Museum. Shutter To Think: The Rock And Roll Lens Of Paul Natkin, runs through August 25th. I still have my copies of Bright*Lights, the PhotoReserve free paper Natkin put out with fellow photographer Bill Sosin, in the late 1970s. Freelance writer Cary Baker and rock DJs Bob Gelms, Scott McConnell, and Mitch Michaels were among the guests who contributed copy.

Archie Powell & The Exports are one of the acts that will be playing at the Do Division Street Fest and Sidewalk Sale this weekend on Division from Damen to Leavitt. The band’s Great Ideas In Action CD came in second on the BHT list of 2012’s top releases.

The Right Tidys, a co-ed power pop band that will be releasing its debut in the coming months, are performing at a Do Division After Party at Phyllis’ Musical Inn tomorrow night. Power pop veterans 92 Degrees go on at 10:00 PM, The Right Tidys at 11:00 PM, and Moist Guitars go on at Midnight.

Singer Sharon Van Etten will be giving a free performance at the Pritzker Pavilion in Millennium Park this coming Monday, June 3rd at 6:30 PM.

Eleanor Friedberger, one half of the duo Fiery Furnaces, will be performing songs from her new Personal Record release during an in-store solo acoustic set at the Reckless Records location in Wicker Park nerxt Friday at 6:00 PM.

If you check out The Smithereens next Saturday when they perform at the Wells Street Art Fair, be sure to tell them you saw an item on Broken Hearted Toy about the new Smithereens 11 Live Compilation that will soon be available on iTunes. Lead vocalist-guitarist Pat DiNizio posted about it on Facebook. The compilation has live songs, demos, and alternate versions among its 21 tracks.

Fest For Beatles Fans has announced the lineup for its Chicago event on August 9th - 11th. British Invasion duo Chad and Jeremy and power pop musician Greg Kihn will be appearing for the first time. Returning favorites Joey Molland from Badfinger, singer Billy J. Kramer, and producer/musician Mark Hudson are also on the bill.

The Handcuffs are scheduled to return to the studio next week to begin work on their fourth release. The Chicago-based indie rock band recently added guitarist Susie Q to replace longtime member Ellis Clark, who left earlier this year. That leaves drummer Brad Elvis as the only dude in the band. Clark’s new solo effort, LP Number One, is already picking some positive reviews.

Mighty Con, a toys, comics, and gaming convention, will be held at Pheasant Run Megacenter in St. Charles on the weekend of June 21st -23rd. A one day pass is $10, a weekend pass is $15.

Peter Tork, the most lovable Monkee according Desiree Burcum from my former comedy group, Famous In The Future, has a gig at the Old Town School Of Folk Music on Sunday, June 9th. Burcum and fellow FIF members Frank Carr and Tina Teske will be performing as The Rut at The Rolling Stones Tribute show being hosted by alt rock band whitewolfsonicprincess next Saturday, June 8th at The Brothers K CoffeeHouse in Evanston. Maybe if she promises to see Tork on Sunday, he’ll come to see The Rut on Saturday.

Glancing over the Official Hollies Facebook page, I noticed a post about a Hollies Tribute band in the UK called The Hollywood Bees. This is the first Hollies tribute band I’ve heard of, and judging from their promo video on YouTube, they’re fairly successful. If there are any other Hollies tribute bands out there, I’d love to hear from you.

Robin Hitchcock, the eccentric English musician whose critically acclaimed career dates back to his time with the Soft Boys back in the 1970s, dropped by Chicago radio station WXRT yesterday morning for a visit with DJ Terri Hemmert. He was promoting his performance last night at City Winery, which involved the audience imbibing fine wines specially chosen by XRT Program Director Norm Winer between songs. It’s a new concert/wine tasting series the venue has started.

Hitchcock also chatted with Hemmert about his latest release, Love From London, and he performed an acoustic version of one of the songs from it. He also did an older tune, “Serpent At The Gate.” The interview touched on Hitchcock’s work as a writer and artist (he created the front and back cover art for Love From London), as well as his recent musical collaborations with Peter Buck from R.E.M. He came across as hip and funny; it was clear that he and Hemmert have a good rapport.

Edge City, a syndicated comic by Terry and Patty Laban, and carried by the Chicago Sun-Times, is currently running a story about its main character Len going to a punk concert with his buddy. I had to laugh since the band is called The Measles.

Long ago in another era, I wrote a parody of Rolling Stone magazine's Random Notes column called Rancid Notes for a local paper called Metro Calendar. One of the fictional items I came up with was about a punk band called The Measles. I don’t remember all the particulars, and I’m not about to hunt through my archives, but there was a member named Lita Rebellion, and the band’s debut was titled, Eat Yer Offal. This was back when I was an uninformed child who hated punk rock. These days, I know better.
Posted by Terry Flamm at 11:06 PM