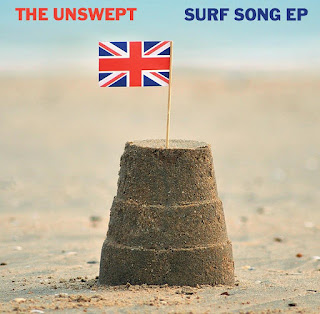 Cousins Charlie and Ryan O’Brien, the founding (and until recently the only) members of The Unswept, must have packed some authentic original British Invasion mementos in their luggage when they moved from Sheffield, England to Chicago a while back. The four short tracks on their Surf Song EP please with jangling guitars, clever lyrics, and catchy melodies. The O’Briens have since brought new members into the fold, but it’s unclear as to whether they were part of this release. A new effort from The Unswept is due out later this summer.

The fun “Surf Song 89”  finds these Brits longing to be surfers ala The Beach Boys, and falling for a California type girl. “She’s So Cool,” which gives a shout-out to the O’Briens’ new Chicago ’hood, Logan Square, sports a more energetic arrangement as a guy praises his impressively hip girlfriend. “You’re Going Home”offers more relationship observations set to chiming guitars, while on the guitar-driven “Get Away,” The Unswept recapture the psychedelic era of late 1960s San Francisco.

Judging from their live performance with the full band at International Pop Overthrow - Chicago a few weeks back, it looks like the O’Briens’ decision to add new members will fortify The Unswept’s engaging approach.
Posted by Terry Flamm at 11:09 PM