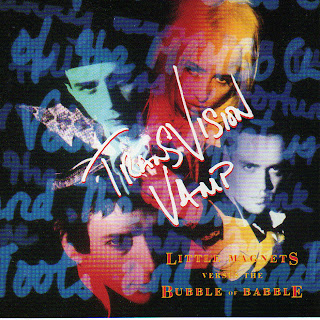 Before moving on to the review, here's a reminder that the Blue Whiskey Independent Film Festival is currently running through July 29th at Cutting Hall in my home town of Palatine. Tonight’s featured films are Director Carlo Gennarelli’s documentary, Ordinary Joe; Sophia Kruz’s documentary Time Dances On; and Andrew Morris’s mockumentary/comedy Red Balls. The evening begins with three short clips: The Diet Situation; Like A Good Neighbor, and The Guy Who Lived In My Pool. Individual session (one night’s worth of films) tickets are $12.

And now, a review of the Transvision Vamp CD, Little Magnets Versus The Bubble Of Babble, which I wrote for the Illinois Entertainer in 1991.

Lead vocalist Wendy James has made Transvision Vamp a hit by combining a glamorous blonde image with a street-wise attitude reminiscent of Lou Reed. Guitarist/chief songwriter Nick Christian Sayer has penned at least four Reed-influenced tracks on Little Magnets Versus The Bubble Of Babble, the best of which is “Aint No Rules.” James’s theatrical appeal is well suited to the song’s spare guitars and drums arrangement and loping bass line.

The pulsating “Pressure Times” preaches rebellion in the face of incoming hassles from every angle, while the catchy first single, “(I Just Wanna) B With U” is catchy and seductive. “If Looks Could Kill” fails to catch fire, while the would-be slap at the media, “Don’t Believe The Hype.” fails to hit its target. James and her mates are a lot more fun on the 1960s style vamp, “Twangy Wigout” and the rollicking “You Put A Spell On Me.”
Posted by Terry Flamm at 9:29 PM