CD Review: King Of Prussia - Transmissions From The Grand Strand 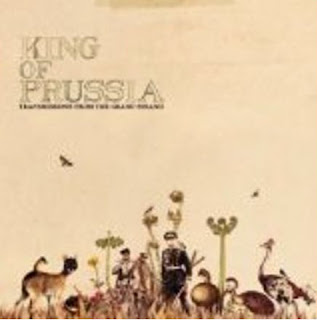 King Of Prussia has resurfaced in Chicago four years after impressing critics with its eccentric indie rock debut, Save The Scene. During the hiatus, founding member, singer-guitarist  Brandon Hanick toured Europe with an international collection of musicians, and wrote the mysterious songs that would become Transmissions From The Grand Strand. Some of those musicians contributed to this second CD, along with a mix of original members and a few newcomers.

Most of the new songs eschew indie rock for a baroque pop approach, and are romantic with a haunting or at least troubling undercurrent. Hanick’s lyrics are imaginative and poetic to the point that listeners might wonder if this is a concept album based on some noted literary work. “Oh Me,” which alludes to a forbidden love, and “The Ghost Of L’Estartit” are particularly lush and enticing.

Still, Transmissions From The Grand Strand might have sounded a little too similar over its 11 tracks, if not for the more indie rock “Your Graduating Hours” and “. . . For The Masters Said It So,” an exotic mix of acoustic guitar strumming and an echo-laden chorus of singers
Posted by Terry Flamm at 6:39 PM