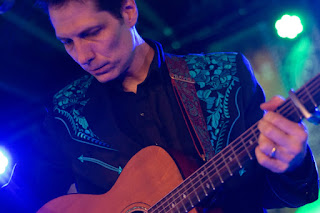 Chicago-based singer/songwriter Steve Dawson has been crafting Americana-flavored indie rock since he formed the band Stump The Host with his wife Diane Christiansen in 1988. It’s a path that’s led to Dolly Varden (also with Christiansen), Funeral Bonsai Wedding, and occasional solo efforts. On his introspective, recently released album At The Bottom Of A Canyon In The Branches Of A Tree, Dawson plays almost all the instruments himself, and as producer, expertly layers his vocals.

It’s inevitable some of the somber reflections here evoke the pandemic. Especially “This Is All There Is” and “Hard Time Friend,” which finds Dawson singing, “I need to know that you’re gonna to be okay/But the only thing I’ve ever really learned is that are no guarantees.” Other songs, like the stinging title track and “Forgiveness Is Nothing Like I Thought It Would Be” examine the pain of fractured relationships. It’s hard to know if “I Will Never Stop Being Sorry” is really about a man who accidentally burned down his house or if it’s an allegory for irreparable damage done to a marriage.

Back in 2013 when I interviewed Dawson for the Illinois Entertainer about Dolly Varden’s For A While album, he seemed surprised but happy with my comparison of his song “Why Why Why” to Fleetwood Mac. (He thought it sounded more like Van Morrison.) “22 Rubber Bands” on At The Bottom also reminds me of Fleetwood Mac, with its shimmering guitar playing and gorgeous melody. The lines “I loved you from the minute I met you/You were taking your first breath curled up soaking wet” and “You spent your first night here on my chest” create a heartfelt message from a father to his child.

The short gem “The Spaces In Between” features Michael Miles on banjo and calls to mind John Prine with fun contradictions like “I’m filled with hope and I’m filled with dread” and “I want to remember, I wish I could forget.” The most energetic song on At There Bottom Of A Canyon In The Branches Of A Tree is “Time To Remember.” With its funky beat and nocturnal jazz ambience, it shows Dawson can succeed in a variety of musical styles.