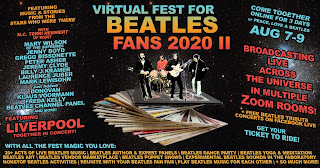 Fest For Beatles Fans has just announced that its massive, multi-city Virtual Fest For Beatles Fans 2020 will take place two weeks from tonight. It’s the weekend the actual Chicago version would have been held if it hadn’t been canceled due the coronavirus. Regular attendees of that event will be glad to discover WXRT DJ Terri Hemmert will be MC for the online version, and several of their favorite guests will be appearing in what The Fest people are calling BALLZOOMS. Peter Asher, Billy J. Kramer, Jeremy Clyde, Laurence Juber, Klaus Voorman, Donovan, and Freda Kelly will be taking part, along with newcomers Mary Wilson from The Supremes, Jenny Boyd, and drummer Gregg Bissonette. The Beatles tribute band Liverpool will be performing, and several Chicago-based musicians and musicians from around the country will appear as part of The Apple Jam Stage. Tickets are $44.00 for the weekend and will only be available through Eventbrite. I’m hoping to post more about this within the next few weeks.

Phil Angotti will be performing at a Beatles Brunch this Sunday afternoon at 2:00 p.m. at the Reclaimed Bar. He had a record release gig at the same venue last week for his new vinyl LP The Best Of Phil Angotti, so maybe he’ll have some copies on hand this Sunday. Reclaimed Bar is located at 3655 N. Western Avenue in Chicago.

Michael McDermott, the Chicago-based singer-songwriter whose politically charged new song “What In The Word” has been rampaging across the WXRT airwaves, has some Patio Concerts coming up August 17 – 19 at City Winery Chicago. “What In The World” is the title track of McDermott’s latest album. Other patio concerts coming up at City Winery Chicago include Al Rose and Steve Doyle on August 11; Gordon Ivanovic and Fareed Haque on August 5; Sandra Antongiorgi Trio Unplugged on August 4; Lynne Jordan on August 3 and August 10; Chicago Global All Stars on July 29; and An Evening With Neal Francis on July 28.

The Hoodoo Gurus brand new single titled “Hung Out To Dry” came out today. Like McDermott’s “What In The World,” its video features an homage to Bob Dylan’s “Subterranean Homesick Blues.”

If everything had gone according to plan, I would be having a great time in London today.
My wife Pam and I finalized our plans somewhere around early March for a dream vacation to London, Manchester, York, and Liverpool. Of course, COVID-19 put an end to that. I’m now following so many Instagram sites based in those cities I’ll be an expert on their food and entertainment scenes by the time we do go (hopefully) sometime in the spring 0f 2021.

The last few nights, I pulled out the fancy Container Store box with all the memorabilia I saved from our 2006 European trip (it’s not like we do these things every year) and relived a lot of fun memories. I have some cool U.K., French, and German papers. I always search for local publications wherever we go, whether it’s Paris or Cape May. After a few days in London back in 2006, I had collected so many free papers I decided to mail them home rather than lug them around in my backpack. A very polite gentleman at the post office weighed them and came back to the counter. “It’s going to cost you $120 American money to send a pile of free newspapers home. Do you really want to do that?” I thanked him for pointing that out, and decided to only mail my British Air Museum mug. Back at our bed and breakfast, I sorted through my stash to decide which ones I could just pull a page or two from and throw the rest of the issue away.

The publications that survived that trip in their entirety include Filter mini uk from England with Yeah Yeah Yeahs on the cover; The Skinny from Scotland with XMen The Last Stand on the cover; and Virgin! from France with Red Hot Chili Peppers, Festival de Cannes, and Bob Marley on the cover. I saved a bunch of pamphlets, flyers and postcards as well. They’ll have to hold me over for now.
Posted by Terry Flamm at 10:15 PM