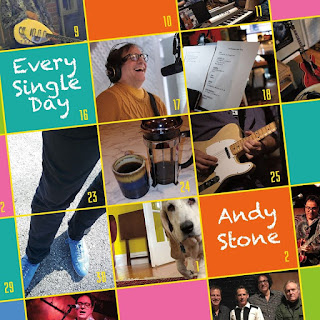 Andy Stone’s followup to his 2017 effort This Giant Awoke finds the Providence, Rhode Island singer-songwriter once again exploring relationships from various angles. Listening to Every Single Day, it’s easy to believe Stone is also a novelist, because he crafts believable scenes filled with heartfelt lyrics. Nothing gets too literary though, because he sets each of the 11 tracks a melodic arrangement.

The stark piano ballad “I Never Should Have Said It” gives us a guy who who tried to convince himself he was in love, only to cause pain when it turned out to be untrue. The energetic “Why” depicts a doomed relationship where neither person can pull the trigger on ending it, and the melodic “Isn’t It Funny?” suggests we all worry too much about what other people think of us. On the more romantic side, “The Man Who Could Love Only You” evokes a slow dance hit from the early 1960s, while the clever “You Are A Problem” grooves to a 1980s synth beat.

“Gonna Be Different” is a catchy and celebratory track with Stone proclaiming “I knew there was a fair tale ending from the start.” For power pop fans, “I’m Gonna Love You” is likely to be the standout track, with its high energy arrangement and a whirlwind of guitar action in the middle. Every Single Day can be purchased from Andy Stone’s Facebook page.
Posted by Terry Flamm at 7:45 PM