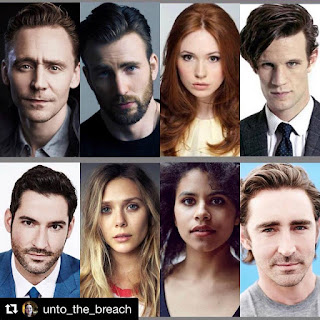 The ACE Comic Con kicked off today and runs through Sunday at Navy Pier. Guests include Matt Smith, Karen Gillan, Zadie Beetz, Chris Evans, Tom Hiddleston, Elizabeth Olson, and Lee Pace. There will also be artists and writers on hand, along with a number of vendors.

Liz Phair has a 7:00 p.m. gig this Sunday night at Metro, with Material Reissue as her opening act. See yesterday’s post for more details.

Tickets went on sale today for Joe Jackson at Thalia Hall on February 21 and 22. Other tickets now available include Cat Power and Willis Earl Beal at Thalia Hall on December 20; Steve Earle at City Winery Chicago on January 14 and 15 and February 25 and 26; Regrettes at Subterranean on November 30; and Lily Allen at The Vic on Halloween.

Monty Python member and Spamalot creator Eric Idle has a new book out titled Always Look On The Bright Side Of Life – A Sortabiography. An ad in the Review section of UK publication The Daily Telegraph describes the work as “The Holy Grail For Comedy Fans” and “Absurdly Funny.”

Garbage will perform next Wednesday, October 17 at The Riviera Theatre as part of its 20 Years Paranoid tour. On that same night, The Church will be at Lincoln Hall as part of its Starfish 30th Anniversary Tour.

The Lantern Tour, which features Emmylou Harris, Jackson Browne, Mary Chapin Carpenter, Shawn Colvin, Lila Downs Steve Earle and Graham Nash has its first gig coming up on October 23 at the City Winery in Nashville, TN. Other stops include Washington, D.C., Boston, and New York. The series of acoustic concerts will benefit the Women’s Refugee Commission, which advocates on behalf of migrant and refugee families.

High Concept Labs is holding an Open House from 7:00 to 10:00 p.m. on Thursday, October 25 at Constellation. There will be performances and exhibitions, as well as an opportunity to engage with artists. Admission is $20. Constellation is located at 3111 N. Western Avenue.

According to a blurb in a recent copy of the Chicago Tribune, journalist/filmmaker Cameron Crowe plans to turn his hit movie Almost Famous into a musical. He’s enlisting critically acclaimed composer Tom Kit to write the music, and is hoping for a run on Broadway at some point in the future.

The Logan Center Blues Fest, three days of concerts, workshops, film, poetry and conversation, will be held next weekend (October 19 – 21) at the Reva and David Logan Center For The Arts. Charlie Musselwhite, Ruthie Foster, and Chris Thomas King are the headliners, and several other musicians will participate.

Black Friday Record Store Day is still over a month away, but vinyl collectors can already check out the official RSD website for the list of limited-edition releases that will only be available on November 23. Generally, the Black Friday version doesn’t generate as much of a buzz as the April version, but there are definitely some prime choices this time around from The Byrds, Cheap Trick, Garbage, The Jimi Hendrix Experience, Paul McCartney, and a new compilation from Paisley Underground veterans The Bangles, Rain Parade, The Three O’Clock, and Dream Syndicate.

Private Peaceful, the play based on Michael Morpurgo’s 2003 critically acclaimed children’s novel, has its Chicago premiere next Wednesday, October 17 at the Greenhouse Theater on Lincoln Avenue and runs through November 11. Lead actor Shane O’Regan was an Irish Times Best Actor nominee when Private Peaceful was staged in Ireland.

Beatles fans are mourning the loss of another key figure in the band’s legacy after the news that recording engineer Geoff Emerick passed away. He worked closely with John, Paul, George and Ringo on a number of groundbreaking techniques, particularly on the Revolver and Sgt. Pepper albums. A number of people in the Chicago area were treated to a rare opportunity to meet Emerick in person when he was a special guest at The Fest For Beatles Fans this past August. From all the accounts I saw on Facebook, he was as gracious as he was talented.

On another sad note, the power pop genre lost one of its best practitioners when vocalist-guitarist John Wickes passed away from cancer. He recorded “Starry Eyes” and “Teenarama” (I still have those 45s) as a founding member of the UK band The Records, and went on to records gems like “That Girl Is Emily” during his more recent solo career.
Posted by Terry Flamm at 9:29 PM