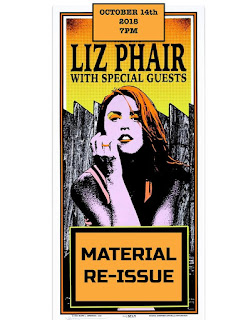 Indie rock singer-guitarist Liz Phair has a 7:00 p.m. gig this Sunday night at Metro. Back in 1993, at a time when our city’s music scene was criminally neglected by the national media, she put Chicagoon the rock and roll map with her critically acclaimed 18-song debut Exile In Guyville. “Help Me Mary” and “Never Said” became FM radio hits. Phair recently released Girly-Sound To Guyville: The 25th Anniversary Box Set.


Material Issue was another hot band from Chicago in those days, with their debut International Pop Overthrow spawning two videos in heavy rotation on MTV.  Phair has tapped the band’s current version as her opening act for this Sunday’s show. Material Reissue features original band members bassist Ted Ansani and drummer Mike Zelenko, along with Phil Angotti in the lead vocalist-guitarist role once held by Jim Ellison. They’ve opened for Matthew Sweet and The Posies. Metro is located at 3730 N. Clark, not far from Wrigley Field.

Still paisley after all these years. Original Paisley Underground bands The Bangles, The Three O’Clock, The Dream Syndicate and The Rain Parade have combined forces on a new album that features them covering each other’s material from the early 1980s. The 12-song 3X4 will be available on vinyl from the Yep Roc label for this year’s Black Friday Record Store Day and will have its official release on January 11.
Posted by Terry Flamm at 9:27 PM