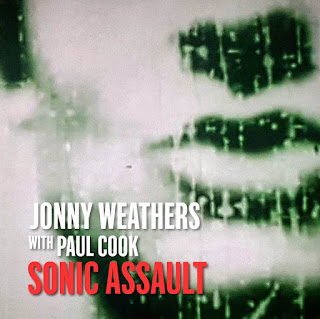 Singer-guitarist Jonny Weathers’ new four-song EP Sonic Assault features the same sort of raw vocals and hard-driving arrangements that made his 2017 full length effort Jonny Weathers And The Cosmic Scream such a thrill ride. Weathers, the alto ego of London-based musician Gareth Proctor, gets some potent help this time out from drummer Paul Cook of The Sex Pistols fame. Together, they generate enough energy for an entire album.

On “The Man From The Orleans,” Weathers conjures a mythical ambience via cryptic lines like “He comes in here but he’s rarely seen” while spinning the tale of a woman searching for her mysterious mate. “Mother Shotgun Baby” and “Mongo Shaker” live up to their provocative titles, and each includes a freewheeling instrumental passage. “Take It Back” is more of a heavy metal stomp, as Weathers and Cook tap into that same Jimi Hendrix vibe that ran through Cosmic Scream.

Personal note: The line, “Caught the last train out of Chicago” in “The Man From The Orleans” makes it a perfect song to kick off a playlist I created for when I’m riding the 12:30 a.m. Metra back to Palatine on after seeing a band in perform in the city.
Posted by Terry Flamm at 7:55 PM