In Tune With Montrose Saloon 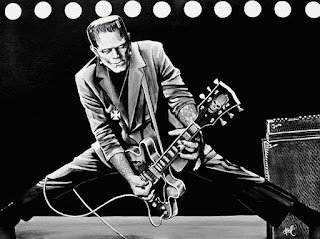 It comes as no surprise that this year’s Halloweekend is being staged at the Montrose Saloon. An annual event that features local bands covering famous recording artists, Halloweekend has always been a wandering spirit. It’s been staged at Martyrs’, The Abbey Pub, and even a recording studio in the River North neighborhood. Plus, Montrose Saloon has quickly established itself a hot new spot for some of Chicago’s best local bands.

Halloweekend runs this coming Friday and Saturday, with a line up of Ellis Clark and Ary Jeebie as Alice Cooper; Phil Angotti as Chris Isaac; Rachel Drew as Blondie; Tiberius Strange as Boston; Hollow Men as The Cult; Androgynous Mustache as Kenny Loggins; Boudoir Heroes as Cream; Mammal as Zombie Buddy Holly; I Lost Control as Interpol; and Statutes of Liberty as MC5. There will also be a costume contest. The music starts at 9:00 p.m. each night, admission is $15.
Posted by Terry Flamm at 10:10 PM