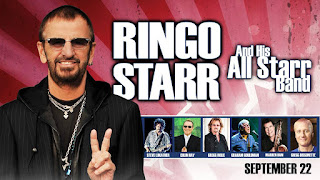 He didn’t pass us by with this tour. A warm welcome to Ringo Starr, iconic musician and ambassador for peace and love, on his long-awaited return to Chicago. He’ll be performing at the Chicago Theater in downtown Chicago tomorrow night. According to set lists I’ve seen posted online, he’ll be playing a mix of Beatles gems like “Yellow Submarine” and “With A Little Help From My Friends,” along with his solo hits like “It Don’t Come Easy” and “Photograph.”

The two-day Goose Island 312 Block Party kicked off tonight with performances by TV On The Radio, Sunflower Bean, and four other bands. Drive By Truckers and The Hold Steady headline tomorrow night. The festival is being held just outside the brewery, at 1800 W. Fulton Street.

Minstrel Palooza Live returns to Durty Nellie’s in Palatine tomorrow for another gathering of musicians related in various way to the Minstrels Music Store in Niles. Scheduled acts include Gus Adonis; Kevin Lee and The Kings, Cracked Actor; Van Go; Todd Money Experience; Larry Mitchell and Dave Ulrich; Charlie Victor; and Tiger Bite. Admission is free, and the show starts at 1:00 p.m. Van Go has a new album titled I Wish I Could Be Grateful coming out next Friday, September 28. Power pop expert Boris Boden recently played a track from it on his Secret Weapon podcast on Woody Radio.

MusicDirect is holding a “Rock ’N’ Roll The Warehouse” Vinyl LP Sale! tomorrow Saturday between 10 a.m. and 3 p.m. at 1811 W. Bryn Mawr in Chicago. The Facebook post promises lots of stuff—imports and domestic—in near mint shape. The records are mostly from the 1970s, with a few from the 1950's.

Grand Rapids-based band The JetBeats will be performing tomorrow night at Montrose Saloon on Chicago’s north side. Judging from the catchy 1960s flavored tunes on their latest album, it’s going to be a fun show.

Tickets went o sale today for Elvis Costello and The Imposter at The Vic on November 14; David Crosby at North Shore Center For The Performing Arts on November 19; Rhett Miller at SPACE on December 20; Liz Phair and Speedy Ortiz at Metro on October 13; Procol Harum at City Winery Chicago on February 20 and 21; Kasim Sulton’s Utopia ar City Winery Chicago on March 7; and Teenage Fanclub at Metro on March 6.

Incoming: The Charlatans UK have a gig coming up at Bottom Lounge, which is just west of downtown, next Tuesday. Belly will be doing a show at The Vic Theatre on Saturday, October 6; Fleetwood Mac will be at the United Center on October 6; and Death Cab For Cutie has a show at the Auditorium on October 7.

The Petty Kings will bring their tribute to Tom Petty to The Prairie Arts Center in Schaumburg tomorrow night as part of a double bill with the ‘70s FM Radio Rock band.

Tellin’ Tales Theatre will present Six Stories Up In Climate Change, the latest installment in its long-running Six Stories Up series, on the weekends of September 28 – 30 and October 5 – 7 at the Filament Theatre. The musical comedy, written and performed by middle school students and adult mentors with and without disabilities, is set in Alaska and delivers a timely message about saving the environment. Tickets are $20 for adults; $15 for children. Filament Theatre is located at 4041 N. Milwaukee Avenue in Chicago.

The Old 97’s and Old St. Nick. Having seen The Old 97s bring down the house at Durty Nellie’s in Palatine, I have high expectations for their very first Christmas album Love The Holidays. The cover photo suggests these guys aren’t expecting much in the way of presents, but they’re gifting us with a mix of standards, originals like “Snow Angels” and “Gotta Love Being A Kid (Merry Christmas),” as well as their own take on “Auld Lang Syne.” Frontman Rhett Miller has a solo effort titled The Messenger coming out on November 9.

More holiday merriment. The Monkees Christmas Party, also a mix of standards and originals, is available for preorder in CD and digital format. The new songs were penned by Peter Buck and Scott McCaughey; Rivers Cuomo; Andy Partridge; and Adam Schlesinger.

Saatchi Art will present The Other Art Fair next weekend, September 28 – 30 at the Mana Contemporary gallery at 2233 S. Throop. The event promises visitors will be able to “meet and buy direct from 120 of the best emerging and independent artists in a unique experience.”

Destinos, the 2nd Chicago International Latino Theater Festival, kicked off today and runs through October 21 at various venues around town.
Posted by Terry Flamm at 10:41 PM