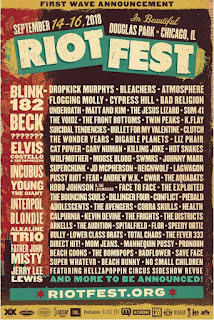 The recently reformed Off Broadway, led by Cliff Johnson, will be opening for Pablo Cruise of “A Place In The Sun” fame tomorrow night at The Arcada Theater in St. Charles.

My nephew Joe Flamm, champion of this past season’s Top Chef on the Bravo Channel, will be one of the well-known chefs on hand for the Fulton Market Harvest Fest tomorrow and Sunday. Rick Bayless, and Stephanie Izard will also do some cooking there. The Fulton Market Harvest Fest also has a full slate of music acts scheduled, and several local restaurants will be represented.

Did I mention I’m his godfather? Joe Flamm will also be among the 250 chefs at this year’s Chicago Gourmet Rock The Fork event at the Pritzker Pavilion in Millennium Park on September 29. There will a 93XRT live music stage as well.

The Indie Press Fest takes place tomorrow from noon to 4:00 p.m. at publisher 826CHI’s storefront location at 1276 Milwaukee Avenue on Chicago’s north side. As noted in this week’s edition of Chicago free paper Red Eye, there will also be music and beverages.

New albums released this week include The Crossing by Alejandro Escovedo; True Meanings by Paul Weller, and Snow Bound by The Chills.

City Winery Chicago has just announced that Procol Harum will be performing at the venue next February 20 and 21.

Chicago-based rock critic Jessica Hopper will be promoting her new memoir book Night Moves at some upcoming events in the area. She’ll join Megan Stielstra for a joint book release at the Women and Children bookstore on September 20, has an appearance at the Empty Bottle club on October 29, and will join José Olivarez at the Chicago Humanities Festival on November 4.

Minstrel Palooza Live returns to Durty Nellie’s in Palatine on September 22 for another gathering of musicians related in various ways to the Minstrels Music Store in Niles. Scheduled acts include Gus Adonis; Kevin Lee and The Kings, Cracked Actor; Van Go; Todd Money Experience; Larry Mitchell and Dave Ulrich; Charlie Victor; and Tiger Bite. Admission is free, and the show starts at 1:00 p.m.

The Petty Kings will bring their tribute to Tom Petty to The Prairie Arts Center in Schaumburg next Saturday, September 22 as part of a double bill with the ‘70s FM Radio Rock band.

Saatchi Art will present The Other Art Fair on the weekend of September 28 – 30 at the Mana Contemporary gallery at 2233 S. Throop. The event promises visitors will be able to “meet and buy direct from 120 of the best emerging and independent artists in a unique experience.”

AntiFlag’s video of its cover of Buffalo Springfield's “For What It’s Worth” is being released in a partnership with Everytown, a movement to end gun violence. The veteran punk band will release its latest album American Reckoning on September 28.

Destinos, the 2nd Chicago International Latino Theater Festival, kicks off September 21 and runs through October 21 at various venues around town.
Posted by Terry Flamm at 10:23 PM