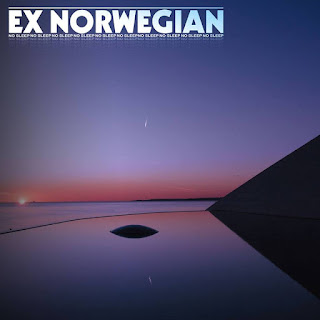 Even while keeping a steady pace of recording a new album each year, Ex Norwegian shows no signs of losing its creative edge. No Sleep, which dropped a few months back, is the Miami-based band’s latest collection of cryptic lyrics set to catchy melodies. And it’s great to hear singer-guitarist Roger Houdaille and singer Michelle Grand joining forces again after Grand was absent throughout much of 2017’s Tekstet (Subtitled).

That Houdaille/Grand tandem is particularly impressive on high energy numbers like “Good Intentions” and “Right Again,” but also works on the more elegant “Seldom Sober,” which is augmented with a string arrangement. They also take turns being the sole lead vocalist; with Houdaille grabbing the spotlight on “Making Deals,” and Grand driving the garage rock fun of “Marquee 1970s.” Grand also brings an engaging carefree attitude to the breezy indie rock of “So Maybe Next Time.”

It’s hard to get a consistent message via Houdaille’s edgy lyrics. “Triggered Weeknd” opens with the inspired mantra of “Feel good deep inside, feel good worldwide, feel good to be alive” but later talks about “corrupting musical minds.” Then there’s this couplet from the acoustic-based “Alt Cool”: “traffic flowing into march/Clear blue sky seeking animal starch.” It might not make sense, but like all the songs on this latest effort from Ex Norwegian, the well crafted performances make it work.
Posted by Terry Flamm at 10:13 PM