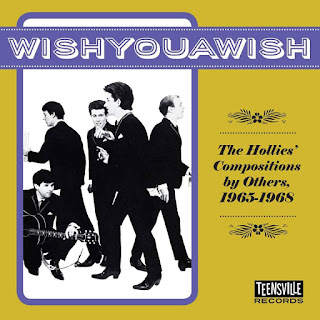 Major newspapers are carrying a story about a London-based Rolling Stones fan who has a acquired a long-lost recording of Mick Jagger and Carly Simon singing together on a ballad believed to be named “Fragile.” Still, I’m more interested in a thread on the Hollies Appreciation Facebook Area page by some of its most frequent contributors. First, Knut Skyberg shared a photo and track list for an upcoming Hollies tribute album called Wishyouawish on the Australian indie label Teensville.

Anthony Edward Marsden noted that he had never heard of one of the songs, “Coming From The Ground.” According to Cameron Burns, Hollies founding members Allan Clarke and Graham Nash wrote the song for the Swedish band The Lee Kings (no relation to Chicago’s Kevin Lee and The Kings) back in the 1960s. Clarke and Nash, along with fellow Hollies Tony Hicks and Bobby Elliot are rumored to have joined in on the recording. I’ll be following the Hollies Appreciation Facebook Area as well as Teensville Records pages to learn more about Wishyouawish. So far, I don’t see a release date.

The Seventh Annual Chicago Women’s Funny Festival kicked off yesterday and is scheduled to keep males and females laughing through Sunday at Stage773 at 1225 W. Belmont. The various shows will include standup, sketch, improv, and musical comedy.

The I AM Art and Music Festival will mark its 10th anniversary of spotlighting local talent tomorrow from 2:00 p.m. to 10:00 p.m. at The House Of Blues in downtown Chicago. There will be performances by Thomas Nicholas Band, Bodega, Gorilla Social, Oakmen, Sin Anestesia, Straight Skinny, Weird Beard and Wilde.

Congratulations to the organizers of last weekend’s YippieFest on successfully carrying out their second annual celebration of theatre, comedy, music, and performance art at The Prop Thtr. Modeled after the late Mary-Arrchie Theatre’s long-running Abbie Hoffman Died For Our Sins Festival, YippieFest had a full house when I dropped by on Saturday night. Abbie vets Famous In The Future offered another set of skits and songs, and was particularly impressive on its clever and biting opening political satire. Carla Hayden and James Moeller of Black Forest Theatre created a hypnotic set of alt rock, with assistance from violinist Nura A. Standup comedian Trevor Gertonson had some funny observations about growing up as a goth rocker, horror movies, and how to handle dangerous pets; and The Agency Theatre Collective hosted a freewheeling open mic set. It was nice to see this counter-culture tradition will live on.

Skokie’s Backyard Bash kicked off today and will feature performances by Sister Hazel, Foghat, and Tributosaurus as the weekend progresses.

I thoroughly enjoyed Mark Olsen’s Los Angeles Times article (also carried in the Chicago Tribune earlier this week) about the new film Juliet, Naked. Arriving in theatres today, Juliet Naked is a rock and roll comedy based on the novel of that name by Nick Hornsby. Olsen’s fascinating and extensively researched piece centered on the various musicians who were enlisted to create new music that sounds like it sprang from the alternative rock of the 1990s. There’s a quote from Robyn Hitchcock that’s one of the best descriptions of the creative process I’ve ever heard. Juliet, Naked got three-star reviews in the Chicago Sun-Times and the Chicago Tribune today.

Wizard World Chicago Comic Con has returned to the Donald E. Stephens Convention Center in Rosemont and runs through Sunday. Celebrity guests include David Duchovny and Gillian Anderson from The X-Files; Nichelle Nichols from Star Trek; James Marsters from Buffy The Vampire Slayer, Torchwood, and Smallville; Michael Rooker and Pom Klementieff from the Guardians Of The Galaxy franchise; Ernie Hudson from Ghostbusters; and several cast members from Outlander.

This year’s Chicago Fringe Festival will take place over the weekend of August 30 through September 3 in various locations in the Jefferson Park neighborhood on Chicago’s northwest side. Over 24 shows are scheduled to take place.