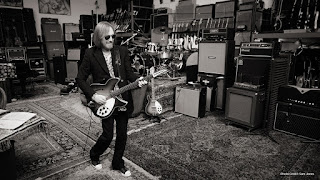 Fans of the late Tom Petty can enter a contest on the Omaze site to attend a listening party with his band The Heartbreakers at The Clubhouse, a secret recording and rehearsing location. Money raised will support The Midnight Mission, a charitable organization that helps homeless people in the Los Angeles area. The more money you donate, the better your chances of winning.

The New Duncan Imperials will be bringing their straw hats, off kilter sense of humor, and The Total Pro horns with them for their 10:00 p.m. gig tomorrow night at FitzGerald’s in Berwyn. According to a video posted on Facebook, the band has a new EP with an undetermined number of songs on it coming out soon.

Tomorrow is the release date for Diamond Boy from Enuff Z’nuff, and Wild! Wild! Wild! from Robbie Fulks and Linda Gail Lewis.

Over The Rhine, the alt rock/Americana band led by Linford Detweiler and Karin Bergquist will be at City Winery next Sunday.
Posted by Terry Flamm at 9:24 PM