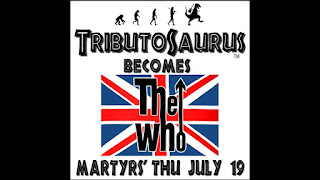 It’s always fun catching a Tributosaurus show, but its tribute to The Who this Thursday night at Martyrs’ has an added significance. The club, located on Lincoln Avenue a few blocks south of Irving Park, has been hit with a financial crisis due to what the owners call an “unexpected collapse of an adjoining business and long-time tenant.” Proceeds from Thursday’s show will help Martyrs’ continue to book some of Chicago’s best local talent. Frisbie (founding member Steve Frisbie will be part of the Tributosaurus show), The Handcuffs, Phil Angotti, Ellis Clark, The Amazing Heeby Jeebies; Tomorrow The Moon, The Sunshine Boys, and Sons Of The Silent Age are some of the acts that have become regulars.

It’s also been the home of an annual George Harrison Birthday Bash, Halloween weekend tribute shows, and a regularly scheduled rockabilly showcase. WXRT has done live broadcasts with major recording artists like The Pretenders at Martyrs’, and as a Facebook post promoting the upcoming Tributosaurus gig points out, Pete Townshend and John Entwistle performed there. The list of international acts that have rocked the Martyrs’ stage also includes Graham Parker, Spoon, Pat DiNizio and Jim Bajak from The Smithereens, Beck, Bob Mould, Ian Hunter, Imelda May, and The Yardbirds. Martyrs says fans should stay tuned for online and silent auctions. As someone who’s enjoyed numerous shows at the club, I’m wishing them the best of luck.
Posted by Terry Flamm at 10:30 PM