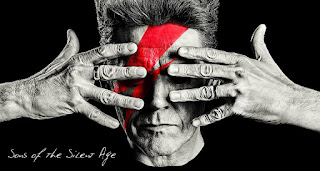 Graphic from The Sons Of The Silent Age Facebook page.

Glam and swagger. Chicago area fans of classic British rock can get a double dose at Martyrs’ on Lincoln Avenue this weekend. The Sons Of The Silent Age will be covering the music of David Bowie on Friday, and Great Moments In Vinyl will perform The Rolling Stones’ Hot Rocks 1964-1971 greatest hits album in its entirety on Saturday. Made up of well-known Chicago area musicians, The Sons Of The Silent Age have notched high-profile gigs at Daley Plaza, when the David Bowie Is exhibition opened at the Museum Of Contemporary Art, and at Taste Of Chicago as Billy Idol’s opening act. They’ve got plenty of firepower to bring Bowie’s eclectic catalog to life. Great Moments In Vinyl is a collective of area musicians who’ve built a strong reputation by performing classic albums in their entirety on the club scene.

Tomorrow night’s English Beat concert at Metro is sure to bring back fond memories for long-time ska fans in the Chicago area. Particularly with Chicago’s own Heavy Manners as the opening act. Both bands started out around the same time; in the midst of a ska revival in England that quickly spread to the States. According to Wikipedia, Heavy Manners opened for The English Beat (as well as The Clash) back in those days. People in attendance tomorrow night can expect English Beat classics like “Save It For Later,” “Ranking Full Stop” and “I Confess,” as well Heavy Manners gems like “Taking The Queen To Tea” and “Hometown Ska.” DJ Chuck Wren is also on the bill.

It’s not the biggest or best known among Chicago’s summertime art fairs, but the Millennium Art Festival at Lake and Michigan Avenue always has an impressive selection of painting, photography and sculptures, and it’s right in the heart of downtown. The festival runs from 11:00 a.m. to 6:00 p.m. Friday; 10:00 a.m. to 6:00 p.m. Saturday, and 10:00 a.m. to 5:00 p.m. on Sunday.
Posted by Terry Flamm at 8:05 PM