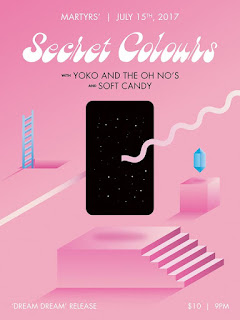 A Broken Hearted Toy welcome to all those who have arrived in Chicago for the Pitchfork music festival running this weekend. Over 40 bands will perform on three stages in Union Park and several big names are involved. LCD Soundsystem, Thurston Moore Group, A Tribe Called Quest, PJ Harvey, The Feelies, Solange, and Ride are among the headliners. The Chicago-based band Ne-Hi will be performing songs from their impressive new effort at 2:30 p.m. on Sunday.

For those who aren’t sure which bands to check out at Pitchfork, local publications The Reader, Red Eye, Chicago Sun-Times and Chicago Tribune are offering their top picks. You can also find the complete schedule, as well as thumbnail bios of the participants, in the current issue of Innerview Magazine. It came out a while ago, but there may still be some copies left at stores like Reckless Records.

Secret Colours, a major power on Chicago’s psychedelic music scene, will bring its new lineup to Martyrs’ on Lincoln Avenue tomorrow night to celebrate the release party of its new Dream Dream album. Yoko And The Oh No’s and Soft Candy are also on the bill.

It will be Six Degrees Of Susanna Hoffs when the Chicago-based indie band The Handcuffs joins Matthew Sweet in downtown Springfield, IL tomorrow at the Amaranth Apple Fest. Sweet has worked with The Bangles as a producer, and recorded three albums of well-chosen cover tunes with Hoffs. Handcuffs drummer Brad Elvis (previously with Big Hello, The Elvis Brothers, and Screams) helped out on drums for a few songs when The Bangles played City Winery Chicago a few years ago. Captain Ivory, The Starter Jackets, and Bruiser Queen are also performing tomorrow at the Amaranth Apple Fest.

The people of Park Ridge, IL must really get into their outdoor festivals. I went past the downtown area this morning while taking the Metra to work, and there was already a crowd of people in the street at 7:00 a.m. for Taste Of Park Ridge. They were drinking coffee from a Dunkin’ Donuts truck rather than beer, but that still counts as partying.

Former WXRT and WLUP air personality Rob Skafish will be at the Chicagoland Record And CD Collectors Show in Hillside from 8:45 a.m. this Sunday, July 16, to sell and sign copies of his book We Have Company: Four Decades Of Rock And Roll Encounters.

You can wear your love like heaven to Wishbone North at 3300 N. Lincoln Avenue next Thursday, July 20 for Tommi Zender And John San Juan: An Evening Of Donovan. The music starts at 7:00 p.m. Zender and San Juan are veterans of the local music scene and have played major roles in other tribute shows.

Author Roger Steffens has a new book out titled So Much Things To Say: The Oral History Of Bob Marley that offers fond memories and reflections from friends and fellow musicians.

My wife Pam and I had a great time watching spirited performances by Gaelic Storm, Tupelo, Makem And Spain, Baal Tinne, and The Academy Of Irish Music last Sunday at the Irish American Heritage Center’s annual Irish Fest. We also caught an entertaining production of George Bernard Shaw’s one-act play How He Lied To Her Husband by Shapeshifters Theatre at Irish Fest.

Roger Waters’ Us + Them Tour hits Chicago next Sunday, July 23 for a concert at the United Center.

Several artists will be displaying their work when Artfest Michigan Avenue takes place next weekend, July 21- 23, just north of the river, near the Chicago Tribune building.

Over 20 bands will be performing at Taste Of River North next weekend, July 21 - 23. The fest takes place at Kingsbury and Erie.

Power pop fans in the Los Angeles area are no doubt familiar with the all-star benefits staged by the Wild Honey Foundation. The events are often tributes to famous bands, particularly The Beatles and Big Star, and the profits go to charitable organizations like the Autism Think Tank. The Wild Honey Foundation is currently seeking donations so it can build its own in-house sound system for future shows rather renting speakers, etc. Anyone interested in helping out can send money to the Wild Honey paypal account. For those in L.A., Wild Honey has a benefit for the Autism Think Tank coming up on July 23 with Marianne, Kristian Hoffman, and special guest Eleni Mandell.

The Rage And Rapture Tour, featuring Blondie and Garbage with special guests John Doe and Exene Cervenka from X, will invade Ravinia next Saturday, July 22.

YippieFest, the newborn love child of the Abbie Hoffman Died For Our Sins Festival, is seeking a “social media guru” to help spread the word about its debut at Prop Thtr on the weekend of August 18 – 20. Much like Abbie Fest, which ran for 30 years at the Mary-Arrchie Theatre, YippieFest hopes to stage three days of theatre, comedy, performance art, and music. Some Abbie Fest vets, like Frank Carr and Desiree Burcum from Famous In The Future; and Carla Hayden and James Moeller from Black Forest Theatre, are among the planners. They’re also still looking for more participants, so anyone interested in performing should check out the official YippeFest website.

Today is Collector Car Appreciation Day, according to a recent blurb in Parade magazine. As soon as I’ve finished posting this blog, I’m going up to my man cave to play with my Matchbox Mustang, Stingray, and Jaguar.
Posted by Terry Flamm at 11:18 PM