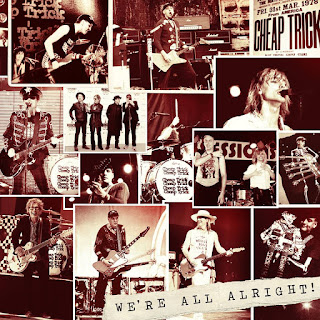 It’s been a little over a year since Cheap Trick’s Bang Zoom Crazy . . . Hello dovetailed so nicely with the band’s overdue induction into The Rock And Roll Hall Of Fame. We’re All Alright! follows quickly on the heels of that success and the initial impact, at least for some fans, has been this effort strays too far into hard rock territory. Still, this is Cheap Trick, so even on the Kiss or AC/DC style arrangements, it’s possible to join in the fun.

On “Long Time Coming,” Rick Nielsen borrows a well-known riff from The Kinks and the always inventive Robin Zander playfully rolls the ‘r’ in ‘real’ when he sings, “A real pole grinder.” Songs like “Radio Lover,” “You Got It Going On,” and “Nowhere,” put an emphasis on hot-looking women and the joys and frustrations of relationships. All the while, Nielsen, Zander, Tom Petersson, and Daxx Nielsen unleash a big and well-crafted sound.

The above-mentioned meat-and-potatoes material has enough flavor to succeed, but the real highlights on the album are the more nuanced tracks like “Lolita,” “Listen To Me,” and “If You Still Want My Love.” “She’s Alright” flows a series of double entendres through an irresistible shuffling beat. Cheap Trick once again strikes gold with a cover of The Move; giving “Blackberry Way” such a gorgeous 1960s British pop feel, it makes the album’s title We’re All Alright! seem like an understatement.
Posted by Terry Flamm at 5:34 PM