Music News and Other Events 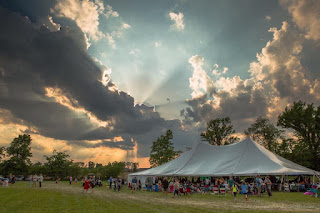 Tickets are now on sale for the Nowhere Else Festival being staged May 27 and 28 about 45 miles east of Cincinnati, Ohio. Billed as Two Full Days Of Music, Art, Earth, Sky, Nowhere Else will have a painting workshop/demonstration, a nonfiction writing workshop, readings, a lecture on regenerative farming, live music, and a screening of Doctor Strange hosted by its director Scott Derrickson. Scheduled acts include Over The Rhine, who perform in Chicago on a semi-regular basis, Band of Sweethearts, and Red Dirt Boys.

One of the first bands I interviewed for the Illinois Entertainer back in the late 1980s was Social Act. Lead singer-bassist Ellis Clark had already built a following as a member of Epicycle, and would go on to work with The Handcuffs and other acts, along with pursuing a solo career. So it’s great to see that he’s bringing Social Act back again. According to a recent post on Clark’s Facebook page, the band recently shot a video at a church in the Humboldt Park neighborhood.

Another Chicago music scene veteran, Mimi Betinis, recently posted on Facebook that we could see the release of a 1972 recording from the original lineup of Pezband some time this summer.

John San Juan, who is a founding member of The Hushdrops and just released a solo album, will be opening for Ian Hunter at Park West this Saturday, May 13.

Local H, the Chicago-based duo of vocalist-guitarist Scott Lucas and drummer Ryan Harding, has a gig this Friday night at Durty Nellie’s in Palatine. Opening act Stoop Goodnoise kicks off the evening at 9:00 p.m.

My superstar chef nephew Joe Flamm and his Spiaggia co-worker Tony Mantuano will be part of Craft And Cuisine event at The Park At Wrigley this Saturday. Other participants include Stephanie Izard of Girl And The Goat fame; Matthias Merges from Yusho; Paul Kahan from Big Star; Chris Teixeira and Samantha Turner from West Town Bakery. There will be over 40 beer and wine tastings.
Posted by Terry Flamm at 10:02 PM