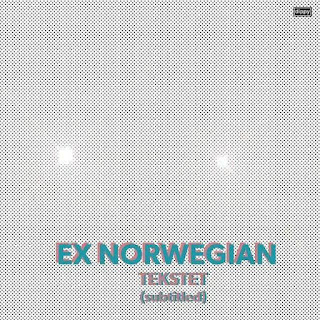 The Miami-based Ex Norwegian shakes things up a bit on Tekstet (Subtitled), its third album in as many years, and eighth overall. The male-female vocal dynamic of singer-guitarist Roger Houdaille and singer Michelle Grand is mostly absent and some tracks have deliberately off-kilter arrangements. Still, Grand makes the most of her three songs and Houdaille layers his distinctive vocals within catchy arrangements that adroitly tap into power pop and various shades of 1960s rock.

“Any Old Time,” with its galloping bass and cartoon voices that drift in and out, is one of Houdaille’s more appealing adventures on this effort. “F’Nostalgia” starts slowly before evolving into a delirious swirl of keyboards, and “Whose Motion” also conjures psychedelic elements. “Gemmas” has a driving beat and an infectious melody that evokes Let’s Active and The dB’s.

Grand sings lead on Tekset’s most energetic tracks, including the bass guitar propelled and defiant “Fearless.” She helps give “June Flakes” a buoyant, 1960s girl group sound that recalls the departed and still missed band The Like, and is also impressive with the catchy retro pop of “O Simone.” It would be nice to find Grand and Houdaille singing as a team again on the next (2018?) release, but in the meantime, Tekset is an eccentric but consistently enjoyable effort.
Posted by Terry Flamm at 10:18 PM