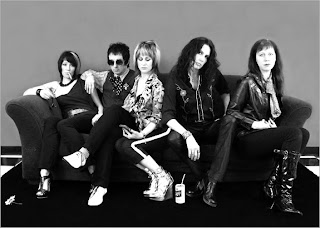 Outdoor concerts across the Chicago area last night were canceled or interrupted by severe storms passing through the area. For a well-written report on how Pearl Jam heroically resumed its show at Wrigley Field after the rain subsided, check out Zack Nechvatal’s blog post on the WXRT website.

I didn’t have a ticket for Pearl Jam, but my wife Pam and I were watching Generation at the Des Plaines Summer Fling. Generation, a fun band that covers 1960s hits, is led by David Huizenga, who’s probably familiar to local rock fans for his past work with The New Invaders. Huizenga frequently joins forces with vocalist Kim Kane, and the band’s choice of material (American Breed, Supremes, The Doors, Buddy Miles) is eclectic and entertaining. Last night, Generation did a great job of keeping the crowd engaged and dancing before the Des Plaines cops had no choice but to shut things down because of the storm. The Des Plaines Summer Fling runs through Sunday.

Chicago indie rock band The Handcuffs seem to be sharing stages with vintage new wave and punk acts lately; such as Blondie, Bow Wow Wow, Gene Loves Jezebel, and Hugh Cornwell from The Stranglers. Tonight, they’ll be joining forces with 80s rockers, The Producers (of “She Sheila” fame)
for the Will Rock For Food benefit at the Marion Civic Center. It’s a charitable event to help raise funds for the Marion Food Pantry.  The Jeff Pritchett Project will also perform and there will be an auction. Tickets are $15, the show starts at 7:00 PM.

The Fourth Annual Blue Whiskey Independent Film Festival kicks off a week long run in Palatine tomorrow night with the Blue Carpet Opening Night. Director Michael Mohan’s romantic comedy Save The Date and narrative short Ex-Sex will be shown, and Mohan will receive the 2013 Independent Filmmaker Achievement Award from BWIFF. Festival emcee Jonathan C. Legat will moderate a Question and Answer session with Mohan as part of the evening’s events.

Other BWIFF highlights include a showing of director Xan Aranda’s documentary, Andrew Bird: Fever Year on Tuesday; and the Festival Centerpiece Concert featuring the band Murley, singer-guitarist Chris Petlak, and the Official Selection Music Videos on Wednesday. Tickets are $8 for most individual sessions and $10 for the Blue Carpet Opening Night, Festival Centerpiece Concert, and Closing Night Presentation. There are also tickets for a complete festival pass, weekend pass, and Saturday pass.

Susanna Hoffs recently announced on Facebook that the long-awaited Volume 3 of her Under The Covers series of collaborations with Matthew Sweet is almost completely mixed. This one will focus on 1980s hits, which begs the question as to whether Hoffs and Sweet will include something by The Bangles.

Even though Black Forest Theatre always comes up with something intriguing for its shows at the Mary-Arrchie Theatre's annual Abbie Hoffman Died For Our Sins festival, it was a bit surprising to see Black Forest founder James Moeller’s Facebook post seeking dancers for its original production of Cheerleader And The Astronaut. I’m tempted to dust off one of my old spandex outfits and audition, but it’s probably best to demure in favor of younger talent. Moeller and fellow Black Forest founding member Carla Hayden are two of the nicest avant garde performance art people you could meet, so I encourage any aspiring hoofers in the Chicago area to give it a shot.