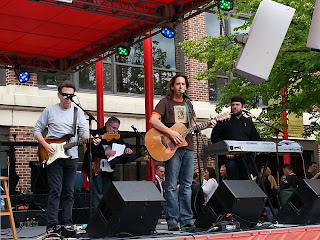 People in the Chicago area awoke to temperatures in the 50s last Saturday morning, which is not the norm for this city at the tail end of July. The weather forecast warned of possible showers, which also didn’t bode well for outdoor activities. Fortunately, it was sunny and around 65 degrees when I arrived at Navy Pier in the late afternoon. Sailboats were drifting by on Lake Michigan and tourists were wearing light jackets.

Visiting Navy Pier brought back fond memories of entire days spent watching live music at ChicagoFest. Long before Navy Pier was rehabbed and revitalized as the city’s number one tourist attraction, it was the site of an annual festival that featured over a week’s worth of shows by some of the best local bands, along with up-and-coming national acts. It was held each August from 1978 to 1982, moved to Soldier Field in 1983, and then died.

The Bad Examples have been one of Chicago’s better bands for over two decades, and have recorded several good songs on a series of CDs. On Saturday, they performed at the LandShark Beer Garden,  which is an outdoor venue toward the far end of Navy Pier, with great views of the lake and downtown skyline. The Ghost Of ChicagoFest had risen and was ready to rock.

Singer-guitarist Ralph Covert continues to front The Bad Examples, but a few of the other musicians on stage looked unfamiliar. Whether these were permanent changes or temporary fill-ins wasn’t clear. The band played its power pop tunes to a crowd comprised of tourists and loyal fans, and tossed in an occasional funk rock or blues number to get people dancing. “Reinventing The Wheel” felt like a Country and Western hoedown, while the honky tonk jazz of “Sammy The Dog” had members of the audience singing along. I wondered if any kids recognized Covert from his Ralph’s World children’s CDs and performances.

Songs like “Your Problem Now” and “Kill Amanda” showed Covert’s ability to mix clever descriptions of relationships gone wrong with infectious arrangements that evoke Squeeze. He thanked Chicago rock station WXRT for playing “Pictures Of A Masquerade,” the crown jewel from The Bad Examples’ most recent CD, Smash Record. Other highlights from their first set on Saturday included “Little Disasters” and “A Place Of Her Own.” The more intricate “Jeune Fille In A White Sundress,” from the Bad Is Beautiful CD, was a touching song about finding love, with images of sunshine and waves hitting a beach that were perfect for July evening, if it was a little chilly.
Posted by Terry Flamm at 11:46 PM