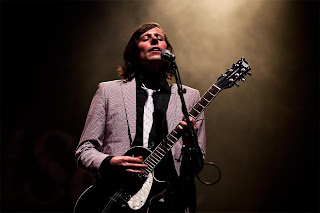 First of all, a hearty congratulations to the Blackhawks on winning the Stanley Cup. There was quite a celebration in downtown Chicago today. It wreaked havoc on the train and bus schedules, but apparently, most of the three million people who gathered in the Loop were orderly, if not entirely sober. Several local musicians are huge Hawks fans -- singer-songwriter Phil Angotti springs to mind -- so Facebook was teeming with their rallying posts throughout the post season. My wife Pam got to see the Stanley Cup (as well as Coach Q) as she peered through the window of the Hyatt Regency.

Hopefully, there will be enough lucid people to hit the club scene, because there’s a lot going on in town tonight.

There’s a monster gathering of some of power pop’s biggest names tonight at the Park West for a live performance of Big Star’s critically acclaimed Third/Sister Lovers album. Original Big Star drummer Jody Stephens is part of the lineup, as is singer-guitarist Ken Stringfellow, who in addition to playing with The Posies and The Disciplines, logged time in a later version of Big Star. Other musicians involved include Mike Mills from R.E.M., Chris Stamey from The dB’s, Mitch Easter from Let’s Active, and Sally Timms from The Mekons. These various stars will be backed by a 20-piece orchestra.

The Zombies will be bringing their sophisticated British Invasion hits, along with some Argent material, to Mayne Stage on Chicago’s north side tonight. Et Tu Bruce is the opening act.

One of Chicago’s better original power pop/cover bands will be teaming up with a newly formed duo that gives Beatles songs a rural twang when The Abbeys  and Sgt. Popgrass play tonight at The Alley Highwood.

Sons Of The Silent Age, a David Bowie tribute band comprised of veteran musicians, is coming to Durty Nellie’s in Palatine tomorrow night. The gig is free, but you need to print out a ticket from the Durty Nellies Facebook page in advance. The show starts at 8:00 PM, and admission is on a first come basis.

Indie rock band Fort Frances will kick off a day of live music at the Lincoln Park Arts & Music Festival  this Sunday afternoon. Dan Hubbard and The Humadors and Howie Day are also scheduled to perform. Steven Page, formerly with Barenaked Ladies, is the 8:15 PM headliner on Saturday.

The Go-Go’s and The B-52’s must really have fun touring together because they’re back at it again this summer. They’ll perform this Sunday night at Ravinia. I caught these two acts together at Ravinia in 2011 (see my review in Archives, June 20, 2011) and was really impressed.

The Gold Coast Art Fair, a juried art festival, will present the works of over 350 artists in Grant Park this weekend. Cirrus Falcon, a duo that has performed at every art-related event since the days of Michelangelo, will be providing live music. Just kidding, Scott and Dave, you guys always sound good.
Posted by Terry Flamm at 10:02 PM