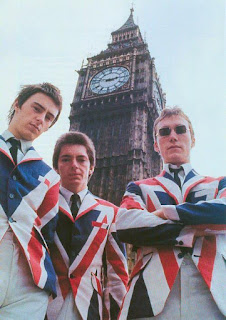 They’ve got a Gift for you. Photo from The Jam’s Facebook page.

Magatha Trysty could be onstage at this very moment, playing songs from its impressive new CD, Your Clothes Will Wear Themselves (my review ran here this past Monday), at Stage Bar. The CD is available at Reckless Records location on Madison in downtown Chicago.

A beautiful and beaming Susanna Hoffs and some happy couples are featured in a new eye-catching video for the breezy 1960s style pop of “Picture Me.” The song is from her new solo effort, Someday. Hoffs has a November 6th gig at City Winery in Chicago.

The Viaducts head out to the Penny Road Pub in northwest suburban Barrington tomorrow night for an evening of guitar-driven garage rock from their Mission To Destroy CD. Singer-guitarist Jimmy Rane is particularly impressive in a live setting. The show starts at 10:00 PM.

The Love Shine Festival for Autism takes place this weekend, kicking off at Multikulti in Wicker Park tomorrow at 2:00 PM and running through 4:00 AM Sunday. A number of local bands are scheduled to perform, including Electric Medicine, Flow Theory, Flabby Hoffman Trio, and Genral Patton. Donations will be greatly appreciated.

Heart will be previewing songs from its new Fanatic CD this Sunday night on the web-based AXS TV  at 8:00PM EST.

The Ellis Clark Allstars have the 9:00 PM slot at Club Lucky tomorrow night as part of this weekend’s Coyote Festival being held in Wicker Park. 24 bands, including Donna Frost, Junction 325, Matthew Morgan and The Lost Brigade, and whitewolfsonicprincess, are scheduled to perform at Club Lucky, Double Door and the Flat Iron Building.

Universal Records plans to release a four-disc box set edition of The Jam’s 1982 album The Gift on November 19th. The English trio’s final effort reached the top of the UK charts and featured the hit single, “A Town Called Malice.” The new deluxe edition will include a Live at Wembley CD, DVD, a 72-page book, and The Jam’s final singles, “The Bitterest Pill” and “Beat Surrender.”

Amanda Thompson of the British band Ozone Baby recently posted on Facebook that she was thrilled to have former Let’s Active member Faye Hunter join her on vocals for the song, “Let’s Pretend We’re Spies.”  Let’s Active frontman/noted producer Mitch Easter recorded Hunter’s vocals in North Carolina. The catchy track will be available for download soon, and will be out on 7” vinyl in 2013. Incidentally, an American band called Ozone Baby suspects that a sudden burst of ‘Likes’ it’s been getting on its Facebook page are from people confusing them with someone else. Possibly the UK outfit? Judging from the cool art the Yank Ozone Baby has on its Facebook page, they could be fun too.

As noted in today’s issue of Redeye, VeganMania  is coming to the Broadway Armory tomorrow, from 10:00 AM to 5:00 PM. The event will offer cooking demonstrations, live music, and poetry readings.

The Metropolis Performing Arts Center is holding a fundraiser this Sunday at the Cotillion Banquet Hall in Palatine. For $55, guests can party to the rock-a-billy sounds of The Neverly Brothers, enjoy dinner, and snack on hor d’ oeuvres.

The Ravenswood ArtWalk has added a film competition to this year’s event, which takes place tomorrow and Sunday on Ravenswood, between Irving Park Road and Lawrence Avenue. In addition to lots of art, there will be live music and food trucks on hand.

Power pop away those extra pounds! The band Didn’t Planet created the “Walking Around Boston” song and video on behalf the Beth Israel Deaconess Medical Center to help promote walking as a form of healthy exercise. The catchy and clever song, which mixes jangling guitars with a positive message, has received significant airplay on the city’s WBZ 1030 AM radio station. Didn’t Planet’s new CD We’re Goin’ Nowhere is now available on iTunes.
Posted by Terry Flamm at 11:15 PM