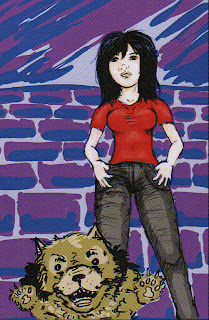 The Matte Black character from the Zaid Comics preview issue of The Silhouette.

I thoroughly enjoyed the Wizard World Chicago Comic Con a few weeks back even though I didn’t get a chance to hobnob with any of the movie or television stars. The imaginative costumes crafted by attendees are always a kick but at times it’s obvious not everyone succeeds at dressing seductively. Still, superhero or villain, sexy or comic, these people are always willing to pose for photos, and give the event a fun Halloween party ambience. There are also hundreds of vendors selling comic books, posters, action figures, books, and articles of clothing.

Some of the more interesting items on display included guitars comprised of Lego blocks, t-shirts with slogans that lit up, and fetching life-size cardboard cutouts of Doctor Who companions Amy Pond and Sarah Jane Smith. I ran across Steve Unger, a vendor who sells t-shirts of rock bands and English TV shows like The Avengers (Steed & Mrs. Peel) and Monty Python. Unger not only has cool stuff, he never complains when I ask if he’ll ever get a Hollies t-shirt. I’ve run into him at Comic Con and Fest For Beatles Fans, but this year he would have had to clone himself to be at both since they were held on the same weekend. Over at the Doctor Who booth, I bought a Jon Pertwee action figure to go with my David Tennant, Matt Smith, and Tom Baker figures of The Doctor.

Artists Alley is a bustling marketplace where vendors strive to interest people passing by in their various creations. The more unusual things catch my eye, like Spiro’s Greek Myths which sells comic books and figures based on ancient mythology. Brian Derfferding has an interesting comic called School: A Ghost Story, in which a 12-year old girl named Lindsay wakes up to find that she’s a bloody spirit haunting a grade school. Listening to Defferding describe the concept reminded me of my writers group, where we share chapters from our novels twice a month. Zaid Comics, which publishes The Silhouette, uses an unusual method that involves photographing scenes with actual actors and then color tinting the shots for each issue. I talked to writer/editor Phillip Diaz and actress Joy Baron, who were very enthusiastic about the project.

Drifting through Artists Alley, I wished I was one of those financiers on the Shark Tank TV show who back entrepreneurs they find worthy. After meeting many of these creative types, I’d throw a wad of bills on the table and say, “Sounds cool to me. Go for it!”