A Second Helping Of Slumgullion 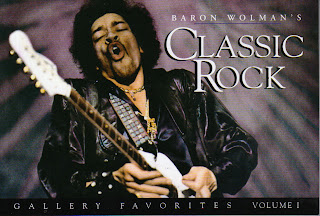 So, I’m back. I posted a brief version of Slumgullion earlier today, and then ran out to meet my wife Pam downtown for lunch, and check out the 94.7 WLS Rock & Roll Art Show And Sale being held this weekend at the Auditorium Theatre. I met Baron Wolman, who first signed on as Rolling Stone’s chief photographer in 1967, and stayed with the magazine for several years. He was selling copies of his hardcover book The Rolling Stones Years, as well as a small paperback book of postcards titled, Baron Wolman’s Classic Rock. I bought the postcards book, which features striking black and white photos of iconic rock musicians such as George Harrison, Jimi Hendrix, Neil Young, Jeff Beck, and Pete Townshend. It was a kick talking to Wolman, who kindly signed the postcards book for me.

It was also nice catching up with Scott Segelbaum, who runs the Rock Art Show online store. We hadn’t talked since he did an exhibition at Arlington Park a few years back. Rock Art Show offers a fascinating collection of art and photographs of and by famous musicians. The Auditorium Theatre is located at  50 East Congress Parkway. Admission for the 94.7 WLS Rock & Roll Art Show And Sale is free and the hours are from 2:00 PM to midnight today and tomorrow, and 1:00 PM to 5:00 PM Sunday.

While I was downtown, I hung around on Monroe Street, just outside of Lollapalooza, and listened to Metric's entire set. Although I couldn't see it, the concert was an entertaining mix of songs from the band's new Synthetica CD, and older material. Monroe and Columbus Drive was reportedly where a number of people tried to scale the fence and sneak into Lollapalooza, but I wasn't one of them.

Speaking of photographers, Timothy Hiatt, who snaps rock and roll pics for the Illinois Entertainer, as well as Rolling Stone and NME, has an exhibit coming up titled You Only Earned What We Gave You: The Photography Of Timothy Hiatt. It will be held at The Underground (56 W. Illinois Street) on August 9th.

In two weeks, the Mary-Arrchie Theatre will be staging its annual Abbie Hoffman Died For Our Sins  to celebrate the anniversary of the original Woodstock Festival. This year’s virtually non-stop celebration of drama and comedy takes place on the weekend of August 17th -19th, with a number of local performers participating. My former comedy group, Famous In The Future will be back again, retaining the distinction of being the only act other than Mary-Arrchie Theatre itself, to have been involved with every single Abbie Fest. The first one was held in 1989.

Mary-Arrchie Artistic Director Rich Cotovsky will summon the spirit of Abbie Hoffman during the opening and closing ceremonies. Some of the other acts on this year’s schedule include A Red Orchid Theatre, Black Forest, Citizens’ Relief, Factory Theater, The Plagiarists, and Rush Pearson. I’m going to try to create thumbnail descriptions of each show for an Abbie Fest preview I plan to post closer to the event, but I’ll need help from the participants. If you’re involved in this year’s Abbie Fest, feel free to contact me through this blog with the lowdown on what you'll be doing.

Youthful power poppers Matt Dodge And The Lobsters will be showcasing songs from their new  Rockerpreneur CD at the Fine Line Music Cafe in Minneapolis next Friday, August 10th. If you want to hear this band at its best, check out “Currency” on its website.

The Bangles once covered Kimberley Rew’s “Going Down To Liverpool” but their connection to the English city runs deeper than that. The band recently dropped the Liverpool Institute Of The Performing Arts to receive an honorary degree from one of the school’s founders, Sir Paul McCartney. The honor is in gratitude for a highly attended master class The Bangles held there back in 2004. See The Bangles Facebook page for more info.

Tickets go on sale August 11th for The Go-Go's concert at Star Plaza Theatre in Merrillville, Indiana on October 8th.

A while back I was lamenting the lack of an outdoor concert by The Smithereens in the Chicago area this summer. They will however be doing a show at Viper Alley in Lincolnshire on September 21st.

Viper Alley was the site of a recent performance by The Zombies. Guitarist Brent Seatter is a member of Thrift Store Halo, who performed first that night, and he tells me the veteran British band was in excellent form. Seatter also described The Zombies and their crew as “true English gents” who were extremely friendly and helpful to their opening act. The recently reunited Thrift Store Halo plans on sticking around a while and may have some new recorded material in the near future.
Posted by Terry Flamm at 10:28 PM