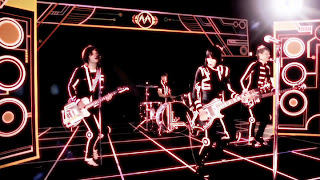 Ravenswood Remix, which bills itself as Chicago’s Recycled Art Fair, takes place this Saturday and Sunday on Ravenswood and Belle Plaine Avenue, a few blocks north of Irving Park. The music lineup includes neo psychedelic rockers Secret Colours; quirky and fun indie rockers Someone Still Loves You Boris Yeltsin; hard-hitting brother and sister duo White Mystery; and power pop band Archie Powell & The Exports, whose Great Ideas In Action is one of the best CDs of the year so far. There will also be workshops on art and recycling, food vendors, and artwork. Ravenswood Remix benefits local school art programs.

Tickets are now on sale for the October 19th Tributosaurus Becomes The Beatles Vol. 5 show at the Copernicus Center on Chicago’s north side. The critically acclaimed tribute band will be performing the Sgt. Pepper’s Lonely Hearts Club Band and Magical Mystery Tour albums in their entirety. Five dollars from every ticket will go the Betty Hemmert Music Scholarship Fund At Rock For Kids.

Season Seven of Doctor Who kicks off tomorrow night on BBC America. Apparently, there are only five episodes left with Amy and Rory Pond as The Doctor’s companions. Karen Gillan and Arthur Darvill have worked well with lead actor Matt Smith on camera, and it’s been fun seeing them hang out together at live promotional events. Check out the Nerdist site for a clip featuring the cast in a celebrity bowling match.

Serendipity, a local band comprised of five teenage girls, impressed the crowd at last Sunday’s rainy Palatine Downtown Street Fest with cover tunes that ranged from vintage Motown to Carly Rae Jepsen’s “Call Me Later.” Serendipity also does its own songs and has a new CD out, called Too Young To Drive. The eight radio-ready tracks feature some catchy arrangements and inventive vocal interplay. The band members wrote some of the tracks themselves and had help from their producer on others, but it’s impressive this young group is already working on original material. That’s a bridge that too many bands on the outdoor festival circuit are afraid to cross. Serendipity plays the Schaumburg SeptemberFest on September 3rd at 5:30 PM.

Susanna Hoffs has announced tour dates in support of her new CD, Someday, and they include a stop at City Winery in Chicago on November 6th.

My nephew, Joe Flamm, was on Iron Chef  last Sunday as part of Stephanie Izard's (of Girl and The Goat restaurant fame) team as they challenged the show's virtually unbeatable Michael Symon. My wife Pam and I went to a get-together of family and friends at the Fado bar and restaurant downtown. We all watched the big screen TV and cheered every time Joe appeared. Unfortunately, Izard's team lost, but it was still a lot of fun. And I'm very proud of Joe. A short article about the show can be found on the Eater website.

The Slide Rules, a band comprised of musicians Andy Stone, Dave Sebastian, Joe Betram, and Jeff Graham have a gig at FitzGerald’s in Berwyn on September 13th.

The new Illinois Entertainer is out, with my interview with Shoes about their first CD in 18 years, Ignition. I also have CD reviews of The Hollies’ Radio Fun and Metric’s Synthetica.

The Melismatics will be bringing their catchy synth rock music to the Double Door in Chicago on October 17th. Chicago based psychedelic/prog rockers Tomorrow The Moon, are also on the bill, along with Rococode and Kids And Explosions.

I’ve been noticing some cryptic posts on the Pezband Facebook page. I’m hoping it means these power pop masters are recording new material.

The Exotics, an instrumental band that includes guitarist Paul Wall from the power pop band Trolley, has a record release party for its new 45, “The Enchanted Interrogation Room” at Kochanski’s Concertina Beer Hall in Milwaukee next Friday.

Happy Birthday to Glenn Tilbrook of Squeeze.
Posted by Terry Flamm at 11:23 PM