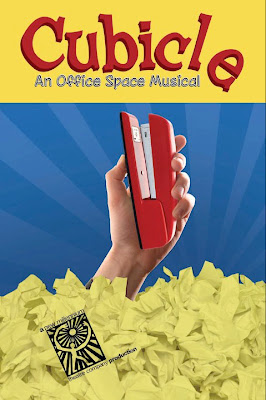 Yeah, This Is Bill Lumbergh Calling. Just wanted to let you know that New Millennium Theatre is hosting Lumbergh’s Birthday Party at Sheffield’s at 3258 N. Sheffiled in Chicago tomorrow night, May 21st, prior to their performance of Cubicle! An Office Space Musical at Theater Wit. Just so you know, there’s gonna be food, beverages, a raffle, and a silent auction. So, yeah, you probably should be there.

Hobbes Still Has It. The comic website Pants Are Overrated had a fun item earlier this week for people who still miss the daily adventures of Calvin & Hobbes. As mentioned in the Mediabistro and eBookNewser online newsletters, Tom and Dan of Pants Are Overrated created a strip that depicts Calvin as a married adult, with a young daughter named Bacon who’s kind of a female version of his childhood self. It’s a clever and heartwarming homage that captures the spirit of the original strip. Long Live Calvin & Hobbes, and thank you, Pants Are Overrated.

Go-Go Dancing With The Stars. Rock N Load had a recent Facebook post announcing that The Go-Go’s came out way on top in a recent fan vote to pick an act for the “Design A Dance” segment on Dancing With The Stars. The Go-Go’s will perform “We Got The Beat” on the DWTS May 24th Season Finale. The song is from the ground-breaking Beauty & The Beat album, which is being released in a special 30th Anniversary edition. The Go-Go’s will kick off their upcoming tour with a date in Las Vegas a few days later on May 27th, and they’ll join The B-52’s for a night of outdoor fun at Ravinia on June 17th.

Baby, You Can Push My Car Around On The Floor. Toynk sells all kinds of cool things through its online site and at its store at 430 N. York Road in Bensenville for adults who are still fascinated with toys. Among the new arrivals is a series of miniature taxi cabs and buses decorated with Beatles album covers, such as Magical Mystery Tour, The White Album, Let It Be, and Hard Days Night. The vehicles are also available in sets of four.

Ow, My Head. David Drazin who along with Frank Carr, Lake Sirmon, and myself, was a founding member of the Famous In The Future comedy group, has gone on to a successful career as a film accompanist and musician. One of his numerous projects is leading the seven-piece jazz band, The Ambassadors. Their performance at the Glendora Ballroom in Chicago Ridge this Sunday from 2:00 to 5:30 PM is likely to include the Drazin original composition, “Chicago Gin Head Stomp.” Details can be found at The Illiana Club Of Traditional Jazz site.

Steal This Meeting. The first meeting for performers interested in being part of the Abbie Hoffman Died For Our Sins Theatre Festival XXIII will be held at the Mary-Arrchie Theatre on Sunday, June 5th. Artistic Director and free spirit Rich Cotovsky will once again become Abbie Hoffman for the three-day celebration of performance art, which will be held this year on the weekend of August 19th through the 21st. I performed with the Famous In The Future comedy group at Abbie Fests I through XX, and I’m sure my old mates will be cooking up a new batch of songs and skits for this year.

And They Don't Mean Dylan Thomas, Whoever He Was. Black Forest Theatre, who are also Abbie Fest veterans, have a Bob Dylan’s 70th Birthday Bash going on tomorrow night at Cafe Mozart in Evanston. Several local musicians will be involved in the tribute, which will run from 7:00 to 10:00 PM.

Ram On. Singer-guitarist Phil Angotti will be performing Paul McCartney’s Ram album in its entirety, with help from Steve Dawson, Tommi Zender, Carolyn Engelmann, Casey McDonough, Dick Schmidt, and assorted other musicians at SPACE in Evanston tomorrow night. There will also be a second set comprised of some of McCartney’s other tunes.

Ralph And What Army? Singer-guitarist Ralph Covert of The Bad Examples and Ralph’s World is staging Acoustic Army #4 at FitzGerald’s Sidebar at 6615 Roosevelt Road in Evanston tomorrow night. The event is being billed as “a solo acoustic evening for adults of hits, rarities, new songs, and requests.” Showtime is 9:00 PM.