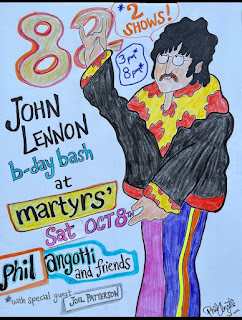 Recording star and Beatles pal Billy J. Kramer will be the special guest at a British Invasion Night at Goldyburgers in Forest Park this Friday. He’ll join Phil Angotti, Casey McDonough, Dick Schmidt, and Blair Holmes on stage. The music starts at 7:30 pm.

Phil Angotti And Friends, with special guest Joel Paterson, will perform a pair of Beatles-related shows at Martyrs’ on October 8. You could almost call them Side A and Side B, but both events are titled 82 Songs For 82 Years: John Lennon Birthday Bash. The earlier, all ages gig starts at 3:00 pm, and the musicians will come back and play all the same songs backwards at 8:00 pm. Just kidding about the backwards part. Angotti’s tribute shows usually draw a lot of local musicians, so expect to see a variety of lineups onstage. Admission is $20, Martyrs’ is located at 3855 N. Lincoln Avenue.

The Spindles, with special guest Rob Elvis, and The Embryos will comprise a double bill of original, well-crafted power pop at Montrose Saloon on October 7. The Spindles get extra credit for including two Hollies covers in their repertoire. The music starts at 8:00 pm, admission is $10.

Minstrel Music, which has been selling musical instruments and providing lessons in Niles for 45 years, will hold an All-Era Reunion on October 23 at the Curragh Pub on Chicago’s northwest side.  There have been previous Minstrel celebrations, but not in the past few years, due to the pandemic. I’ve been to a few at Durty Nellie’s in Palatine, and they drew a wide variety of area musicians. The camaraderie among the performers, co-workers, and audience members is unmistakeable. The event will run from 2:00 to 5:00 pm.

Graham Nash will kick off a month-long tour of Washington, Oregon, Arizona, Colorado, Utah, and California this Thursday, September 29 with a concert in Tacoma, WA. As of today, ten of those dates are sold out.

Thalia Hall in Chicago has a three-act Dr. Martens Presents showcase coming up on October 8 featuring the Los Angeles alt rock band The Regrettes, experimental rock duo Finom (formerly Ohmme), and indie rock duo Child Seat. Admission is free, but since seating is limited, those interested need to RSVP in advance via eventbrite.

Long-time WXRT radio personality Tom Marker recently announced on Facebook that the final edition of his weekly Chicago’s Blues Breakers program will air on the station this Sunday night at 9:00 pm. Thank you, Mr. Marker for all those years of bringing us authentic blues music. Best of luck in your future endeavors.

Congratulations are in order for local musician/comic performer Dave Drazin. This Thursday, Sept. 29, his original piano soundtrack will be heard when Turner Classic Movies shows the 1919 Olive Thomas silent film Out Yonder at 8:45 am Central time. Drazin and I were both members of the Famous In The Future comedy group for a number of years.