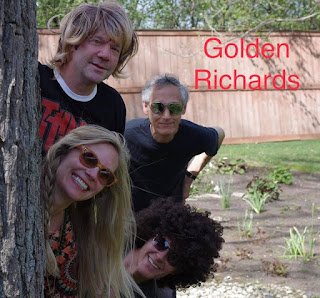 Thursday night’s showcase will find International Pop Overthrow - Chicago heading into the home stretch of its 2022 run at Montrose Saloon. All five acts scheduled are from the Chicago area.

Singer-songwriter Andrew Robert Palmer describes himself as “a regular guy doing a very small thing,” but you’ll realize that’s an understatement when you’re laughing at the cryptic, Dylanesque rhymes in “Revelation At Walt’s Grocery Store.” Sure, a lot of his material is just him on acoustic guitar, but Palmer’s approach works, whether he’s proclaiming south suburban pride or paying homage to Cat Stevens. Musician/producer Aaron Williams has been performing for a number of years and his band has released two albums. His peppy new wave song “Hey Mindy” was used in the indie comedy film Mind Over Mindy. Williams seems equally at home performing with a band or going the acoustic solo route, so it should be interesting to see what he’ll be doing at Montrose Saloon.

Golden Richards deliver on their promise of  “big guitar power pop rock” on the eye-catching video for “Shake Your Hair.” It’s the latest in a series of singles the trio—lead vocalist-guitarist Billy Richards, rhythm guitarist Gil Golden, and vocalist-keyboards player Maryann Magic— have been releasing since 2020. Golden Richards also augment their catchy tunes with clever, funny lyrics. Rolling Numbers have a brand new website to promote their self-described “Cosmic American” approach, which often involves setting imaginative, nontraditional lyrics to melodic country and western arrangements. The quintet’s latest, self-titled album came out earlier this year, and they’ve added a new single called “Best Of Luck” since then. Drew Neely And The Heroes lean toward the lighter side of melodic pop music on a recent series of singles named for various women, as well as on their 2019 album This Could Be You Vol. 1.

International Pop Overthrow runs through April 30 at Montrose Saloon. Most of the 60+ acts involved are local, although there are some out-of-state visitors. Check the official website for the full schedule. You’ll also find links for just about all the acts who’ll be participating in Chicago this year. Even if you can’t attend in person, it’s a great way to discover new music.