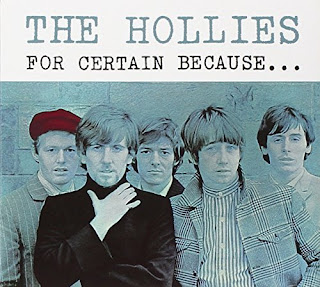 One of the albums certain to mentioned in Andrew Darlington’s new book.

Looks like that section of my library devoted to books by and about The Hollies is going to get another addition. Sonicbond Publishing, a U.K. company that specializes in books about music artists as well as various genres, has just released on track . . . The Hollies  - every album, every song. It will be available in America on February 25. Written by Andrew Darlington, the 160-plus page paperback book covers the British Invasion band’s entire recording career. The price in U.S. dollars is $21.95.

I purchased Decades - The Bee Gees in the 1960s from Sonicbond Publishing late last year and have been thoroughly enjoying it. They also have books about Curved Air, Joni Mitchell, Tangerine Dream, Yes, Electric Light Orchestra, Crosby, Still and Nash, The Clash, Tom Petty, and one titled 1967 - A Year In Psychedelic Rock.

Actually, my library consists of various shelves around a tiny media room, but it does include Graham Nash’s A Life In Focus photo book, drummer Bobby Elliott’s It Ain’t Heavy, It’s My Story autobiography, and Malcom Searles’ The Hollies - Riding The Carousel.

The tribute band Marrakesh Express will play the music of Crosby, Stills, Nash and Young tomorrow night, January 15, at The Metropolis Performing Arts Centre in Arlington Heights, and Lady Day At Emerson’s Bar And Grill, a tribute to Billie Holiday, opens there on January 27.

Plans are already in the works for a David Bowie World Fan Convention to be staged at numerous venues around Liverpool in 2023. The event will celebrate the 50th anniversary of Bowie’s groundbreaking album The Rise And Fall Of Ziggy Stardust And The Spiders From Mars. A number of musicians who worked with Bowie are expected to be involved.

The traditional Irish music band Dervish will perform at the Irish American Heritage Center on Chicago’s north side on February 27. Tickets are now on sale.

Nicholas Tremulis And The Prodigals will be performing at SPACE in Evanston on January 21.

Tickets went on sale today for a 50th Anniversary Tribute to The Rolling Stones’ iconic album Exile On Main Street by Phil Angotti And The Naughty Neighbors at SPACE in Evanston on May 11.

Chicago-based singer-songwriter Peter Joly will showcase songs from his recently released second album Easy Has Never Been The Way at FitzGerald’s in Berwyn on Saturday, January 22.

Big Hair Big Trouble!, the twanging duo of Chicago music scene veterans Ary Paloma and Ellis Clark, just posted its sixth in a series of singles on YouTube. It’s a cover of “Telegram,”  which was originally recorded by the late Kevin Junior with his exquisite pop band Chamber Strings. Paloma and Clark once again harmonize wonderfully on this touching tribute to their friend.

My copy of Kev F Sutherland’s 45 1960s Pop Star Colouring Book arrived today, and while I won’t be going at with crayons or coloured pencils, it’s still a lot of fun. I particularly like Sutherland’s renditions of The Kinks, The Who, Jimi Hendrix, Dionne Warwick, The Hollies, The Doors, Shirley Bassey, The Velvet Underground, Aretha Franklin, Pink Floyd, and The Rolling Stones. Each portrait is accompanied with a short profile written by Sutherland and edited by Only Pop Fans. It’s available on Amazon for $8.99. Henderson has also created colouring books with pop stars of the 1970s, 1980s, and 1990s.

Congratulations to pitcher Jon Lester on his retirement from major league baseball. Lester was a major factor in the Chicago Cubs being able to win their first World Series championship in over 100 years. This was after he performed a similar bit of magic for the Boston Red Sox. I’m not a baseball expert, but a few columnists I read feel he’s destined for the Baseball Hall Of Fame.

Even those who weren't around in 1963 when “Be My Baby” by The Ronettes first raced up the singles charts have come to recognize it as one of rock and roll’s all-time classics. Phil Spector’s wall of sound production has a lot to do with the song’s endurance but it’s safe to say Ronnie Spector’s gorgeous and emotionally potent vocals played a bigger role. Ronnie Spector’s talent was immediately recognized by The Rolling Stones, The Beatles, other major stars who were thrilled to meet her. Rock In Paradise, Ronnie.

Joni Mitchell will be honored as Person Of The Year at the Recording Academy MusiCares benefit gala being held on January 29. The event will feature performances by Graham Nash, Black Pumas, Brandi Carlile, Herbie Hancock, James Taylor, John Batiste, Leon Bridges, Maggie Rogers; Mickey Guyton, and Pentatonic. MusiCares supports the health and well being of the music community.

The full Get Back documentary series that recently ran on Disney+ will become available on Blu-Ray and DVD on February 8. And in other final days of The Beatles news, the iconic Rooftop Concert will shown on IMAX on January 30. The hour-long concert will also have a February 11 – 13 theatrical release.