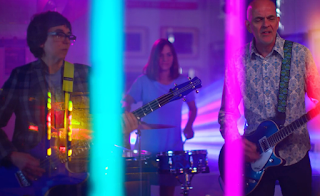 Sunshine Boys will be at the Lakeview East Festival Of The Arts today.

Welcome to everyone who’s in town for the Pitchfork Festival, which runs through tomorrow at Union Park. I usually don’t provide a breakdown on the schedule since that’s handled much more proficiently in Chicago’s daily and free papers. Some of the better-known performers include Ty Segall and Freedom Band;  Kim Gordon; WaxaHatchee; Angel Olsen; St. Vincent; Erykah Badu; Cat Power; and The Weather Station.

A trip downtown yesterday found me searching for my favorite free papers, and I was surprised to find the Illinois Entertainer back in the Reckless Records on Madison. I haven’t seen a printed version of this publication in almost two years. I also got copies of New City and The Reader. Be sure to support the local press.

I spent last night preparing my YA novel pitch for the two literary agents I would be speaking with this morning. The Zoom/Skype meetings were part of the virtual Chesapeake Writing Day Workshop taking place this weekend. Since you don’t have to be there in person, you can choose a city that’s far away from your own. In addition to the option of pitching to literary agents (for an additional fee), there are several seminars to choose from. I’m also taking part in a North Carolina event on November 13, and there’s an October 8 – 9 San Francisco option. I highly recommend the Writing Day Workshops for authors looking to get published. Both agents I spoke with today were friendly and helpful, so we’ll see what happens.

Congratulations to Althea Legaspi on being named a full-time senior writer for Rolling Stone, following six years of contributing to the iconic magazine. Legaspi was one of the editors I had the honor of working for during my 50-year tenure (okay, not that long) as a freelance writer for the Illinois Entertainer.

Go Time and The Spindles, Chicago-based bands that have garnered positive album and live performance reviews here are BHT, are sharing a bill tonight at the Chicago Loop Sports Bar And Grill at 7 W. Streamwood in Streamwood, IL. Doors open at 8:00 pm.

According to a post by Francis Ross on the Liverpool 60s Beat Facebook page, the Pier Head Ferry Terminal in Liverpool is going to be renamed The Liverpool Gerry Marsden Ferry Terminal. Ross posted a link to the Echo (a Liverpool publication) website with the details on how the Gerry And The Pacemakers lead vocalist will be honored for the band’s 1964 hit “Ferry Cross The Mersey.” Marsden passed away in January of this year.

Depending on when you read this, you could still catch Sunshine Boys, EXPO ’76 and  Hoyle Brothers at the Lakeview East Festival Of The Arts today. The festival, which features over 250 juried artists and several music acts, continues tomorrow with live music from Naomi Ashley, Amanda Coppotelli, Steve Hashimoto Duo, Decoy Prayer Meeting and others. See the website for this event for the full schedule.

The 36th Annual Printers Row Lit Fest takes place today and tomorrow from 10:00 am to 6:00 pm, on Dearborn between Polk Street and Ida B. Wells Drive. The festival features well-known authors, and vendors selling new and antique books, as well as independent writers and small publishers promoting their work.

Ellis Clark and Ary Paloma will be staging their My Sweet George tribute to George Harrison on Saturday, September 18 at Post 42 in Evanston. If you’ve been to Fest For Beatles Fans - Chicago, there’s a good chance you enjoyed this act performing on the Apple Jam Stage. They’ve also staged multi-act tributes to Harrison at the Martyrs’ venue on Lincoln Avenue, with some of Chicago’s best music acts.

Legendary Chicago disk jockey Dick Biondi will celebrate his 89th birthday at The Arcada in St. Charles next Sunday, September 19. Biondi is fondly remembered for his night-time shift on WLS in the 1960s, and since the station could be heard across several states, he carried a lot of influence. Thus, his decision to play by The Beatles’ “Please Please Me” in 1963 was one of the first shots fired in the British Invasion. Biondi will be joined by The Ides Of March, The Buckinghams, New Colony Six, Jimy Sohns from The Shadows Of Knight, and Felix Cavaliere from The Rascals, as well as a few tribute acts at his birthday bash. The show starts at 2:00 pm.

Carla Hayden, from the Black Forest Theater Company and the whitewolfsonicprince alt-rock band, currently has an art show at the Brothers K Coffeehouse in Evanston. All her paintings on display through September 30 will be available for sale. Brothers K is located at 500 Main Street.

Cutting Hall will stage a grand reopening event on September 25. That’s also opening night for Theatre Nebula’s production of Something Rotten! - A Very New Musical at the Palatine venue. Tickets are available from the Cutting Hall box office online.

Shemekia Copeland, Cedric Burnside, and Black Joe Lewis And The Honeybears will headline the Berwyn Blues Festival when it takes place September 21 – 26 at the FitzGerald’s venue. Other acts scheduled include Thornetta Davis, Jackie Venson, Zach Person, Lil’ Ed and The Blues Imperials, and Joanna Connor Band.