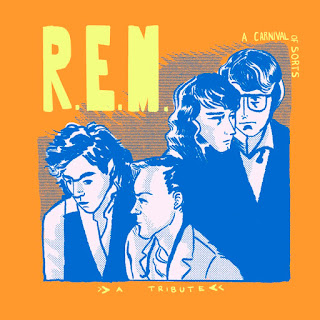 Beyond Wild Heaven. The U.K. alt rock website God Is In The TV has demonstrated an interest in R.E.M. before, but its new recording project—a 38-track album titled A Carnival Of Sorts—outshines any other tribute to the Athens, GA band. The numerous musicians GIITTV compiled for this album come from around the world, and a quick spin through the exclusive (for a limited time) stream on its website reveals most of them hit the mark. Although I have to admit I’m not familiar with any of these acts other than The Darling Buds, who do a splendid job on “Low.” Kudos to the London-based band I, Doris for coming up with brand new lyrics for “It’s The End Of The World As We Know It,” and making it all the more frightening. A Carnival Of Sorts comes out next Friday, and is available for preorder on Bandcamp.

Closer to home, Red Spot Rhythm Section devotes its entire second album to songs originally done by Tom Petty. Won’t Back Down: A Roots Tribute To Tom Petty celebrates classic material like “You Got Lucky,” “I Won’t Back Down,” “Refugee,” “Breakdown,” and “The Waiting” with an inventive and appealing mix of reggae, ska, Americana, and soul. Several musicians were brought together by Chicago-based musician Joshua Siegal, and an extensive roster of vocalists (Livingston, Angela Peel, JC Brooks, Claire Liparulo, Jabal, Todd Kessler, Cosmos Ray, Matt Gandurski, and Jaik Willis) are all top notch. The renditions range from celebratory to inspirational.

Ringo Starr has a four-song EP titled Change The World coming out on September 24 that will be available on CD or cassette. “Let’s Change The World” finds Starr in full peace and love form, and we can always use more of that. The new release also features “Just That Way,” “Coming Undone,” and a cover of “Rock Around The Clock” driven by guitarist Joe Walsh. The Fest For Beatles Fans website has the cassette and CD for sale, and speculates that a 10-inch vinyl version will be coming in November.

The Webstirs recently released “For A Moment” on Bandcamp, the second single (following “Fiction” in 2020) from what will be their sixth full-length effort. “For A Moment” exudes the Chicago-based band’s flair for catchy pop tunes with clever lyrics, although the sentiment here (as it was on “Fiction”) concerns a broken relationship. The album, simply titled The Webstirs, is due out this fall.

Robert Plant and Alison Krauss have recorded a follow-up to their 2007 critically acclaimed album Raising Sand. “Can’t Let Go,” the first single from Raise The Roof is available now. The full album will be released in December.