Cheap Trick - In Another World 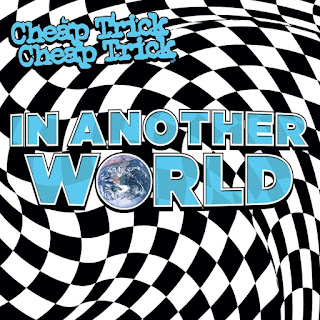 It’s been four years since Cheap Trick released their last album We’re All Alright! and they’re in good shape on this newest one as well. In Another World is a massive-sounding effort, whether on the flat out rock songs or the power ballads. Rick Nielsen’s guitar playing breaks loose throughout the 13 tracks, and Robin Zander once again delivers his trademark combination of emotion and firepower on vocals. Most of the tracks were jointly composed by Nielsen, Zander, bassist Tom Petersson, co-producer (with the band) Julian Raymond, and drummer Daxx Nielsen. There’s also a blistering cover of John Lennon’s “Gimme Some Truth.”

“Another World,” a hopeful reflection on overcoming the current struggles haunting society, first appears as a power ballad enlivened with Nielsen’s rampaging guitar playing. Still, the rollicking “Another World (Reprise)” is the better version because it has the energy to make its message more triumphant. Linda Perry from 4 Non Blondes helped write the hard-hitting and bitter “Here’s Looking At You.” It’s part of a broken relationship theme that also surfaces on the deceptively playful “Quit Waking Me Up,” the melancholy “Final Days,” and the bluesy “So It Goes.”

The slow and atmospheric “I’ll See You Again” is heartbreaking but offers comfort on the difficult subject of saying farewell to a loved one on their deathbed. “Passing Through” covers departure of a different nature; a relationship ending, “Because I can see it now/Your heart’s just passing through.” In Another World succeeds with a variety of approaches, but the most enjoyed tracks will probably be the irresistible rockers like “Boys and Girls and Rock N Roll,” “Light Up The Fire,” and the previously released “The Summer Looks Good On You.”