New Music From The Handcuffs And Peter Holsapple 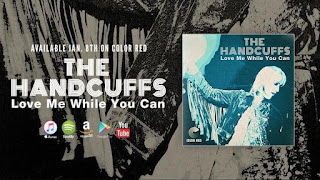 It’s been a while since we’ve heard a new recording from The Handcuffs, but the Chicago-based indie rock band has just released a catchy single titled “Love Me While You Can” on the Color Red record label. The song’s available on Spotify, Amazon, iTunes, and Apple Music, and will be on The Handcuffs’ fourth album Burn The Rails, which is due out this spring. There’s an intriguing, picturesque feel to the lyrics and an energetic arrangement that adroitly blends guitars and piano. Lead vocalist Chloe F. Orwell, the band’s co-founder with drummer Brad Elvis, taps into the glam rock allure of previous Handcuffs tracks like “Vinyl Isabella” and “Come On Venus.” I’m pretty sure I’ve heard them perform “Love Me While You Can” live so it’s nice to be able to add it to a playlist now.

Peter Holsapple reunited with former bandmate Chris Stamey for the splendid acoustic album Our Back Pages, and he recently released a new album with another former member of The dB’s, drummer Will Rigby. Holsapple and Rigby are half of the Peter Holsapple Combo, along with bassist-vocalist Glenn Jones and piano player Josh Kantor. Amplifier - Live At The Q Division Studios features a live performance of the vintage dB’s gem “Amplifier,” along with eight other songs. The blues/funk approach throughout the album may surprise some long-time fans, but Holsapple’s guitar sizzles, and there’s no denying the good-time party vibe. Amplifier - Live At The Q Division is available to download on Peter Holsapple’s Bandcamp page.